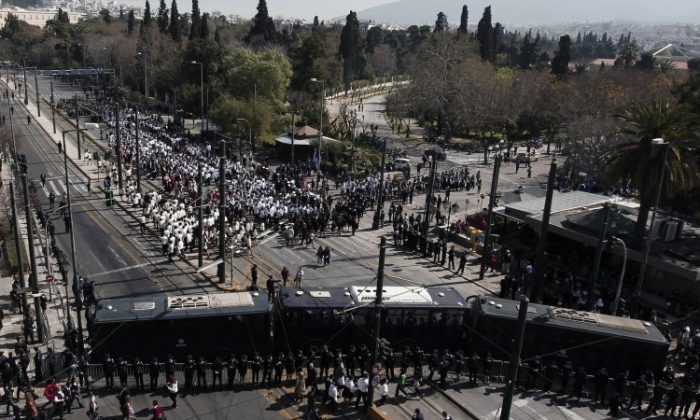 ATHENS—The annual parade for Greek Independence Day, March 25, was designed to honor the people who fought or died for freedom in Greece’s revolt against the Ottoman Empire in 1821.

Each March 25, people gather at Syntagma (Constitution) Square in Athens to watch the parade, which includes a display of Greek military forces.

This year, however, was different from last year—and from any other year in Greek history. The parade was a reflection of Greece’s situation right now, a clear picture of a country with major social problems. Last year, even amid the economic crisis, people still came out, they participated, and they celebrated. But this year was different.

For the first time people were banned from large areas of the route. Five-foot iron fences lined with policemen who formed a second front line, prevented people from getting close to the parade route or too near to President Karolos Papoulias and other government members.

The few people who came to see the parade had to watch it from afar.

Traditionally Greeks celebrate together, openly in the streets without any worries, but nowadays it has become uncommon. Fear overwhelms the social scene, affecting everyone, from VIPs to common citizens.

Parade watchers showed their disapproval of the government in many ways. Some yelled out criticisms, but they were stopped by police. Several groups of security forces did not participate in the parade to show their disapproval. And some who did participate expressed their views by making insulting hand gestures to the president and dignitaries.

Around 7,000 police officers were assigned to control the parade, but even they were unhappy about the situation.

“The Greek federation of police officers strongly appeals the government’s decision to enlist powerful forces to control events in 25th of March parade,” the police said in a statement.

The police said they were uncomfortable with the level of repression used on a national event and felt compromised in being the enforcers.

“This is not our mission,” the statement said. “We declare we are strongly opposed to the unprecedented measures of ‘law and order.'”

The statement said the police were concerned that if anything should go wrong “prosecutors will rush to blame again the Greek police.”

The police force’s concerns only added to a heady atmosphere of fear all around: VIPs were fearful of being attacked, police officer’s feared losing their jobs if they didn’t abide by their orders and feared if they did go ahead of being blamed, while the crowd was fearful that the police would react too strongly.

Underlying all of this was the fear of the economic crisis, touching everyone’s pocketbook and making life harder and harder, and no one knows when that will end.