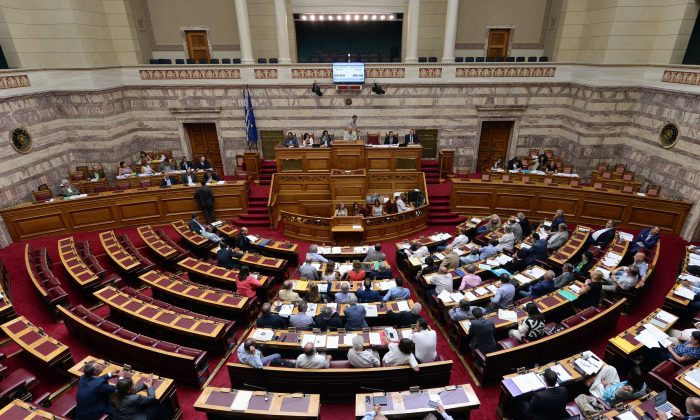 A general view shows a debate of Greek parliament commissions prior to a plenary session in Athens on August 13, 2015. (Louisa Gouliamaki /AFP/Getty Images)
Europe

ATHENS, Greece—The Greek government defended its new bailout program as tough but essential to avoid the nation’s financial collapse, as it faced a rebellion in parliament ahead of a vote on the deal later in the day.

The draft bill for the three-year rescue package worth about 85 billion euros ($93 billion) in loans includes harsh spending cuts and tax hikes that Prime Minister Alexis Tsipras has said he has no option but to implement.

The terms of the new agreement have left Tsipras battling severe dissent from within his party, although the bill is expected to pass with votes from opposition parties. Anti-austerity demonstrations were planned outside parliament for Thursday evening debate.

Lawmakers were debating Thursday at a committee level ahead of a full assembly debate and vote, expected around midnight. The deal then needs the approval of eurozone finance ministers, who are due to meet Friday.

Greece is trying to rush the approval of the deal so that it can get rescue funds in time to make a debt repayment in a week. Without the money, it would default — reviving concerns that it might drop out of the euro, with disastrous economic consequences.

Finance Minister Euclid Tsakalotos said the government has pledged to stick to the creditors’ demand of achieving a primary surplus — the budget without taking into account debt servicing — of 3.5 percent of gross domestic product by 2018. Greece will implement most of the savings in 2017 instead of this year and next year.

Tsakalotos said there will be a package of measures in October 2015 that will be implemented in 2017.

Progress on Greece’s reforms will be reviewed every three months, he said.

“I think there are very difficult measures in this package. In some of these we have tried to play with time” and stagger their implementation, such as gradual increases on diesel fuel taxes for farmers, to soften the blow, he said.

The terms of the bailout were agreed earlier in the week with representatives of Greece’s creditors and come after months of acrimonious wrangling and failed negotiations that have cost the Greek economy dearly.

The economy is expected to have taken a severe hit in July, when talks on the bailout collapsed, leading the government to close the banks and stock market for about a month.

In the three months before that happened, however, the economy grew by an unexpectedly sharp 0.8 percent compared with the previous quarter, the national statistics agency estimated Thursday.

Analysts said the jump could have been due to a strong start to the tourism season and the government’s suspension of some budget cuts. They note, however, that the economy likely took a big hit after the second quarter, when the government was forced to shut banks for about a month and put limits on money withdrawals.

After the Greek vote, the bailout deal will also need approval from several other eurozone parliaments, including Germany’s, before any funds can be disbursed.

Germany, who was the largest single contributor to Greece’s two previous bailouts, has been the country’s harshest critic and has so far maintained a cautious stance regarding the new bailout agreement.

Greece desperately needs funds before Aug. 20, when it faces a large debt repayment to the European Central Bank — stemming from its first bailout — that it cannot afford to repay. It has resisted suggestions of receiving an interim loan to tide it over, insisting it wants to proceed with the full deal.

Greece has long said its mountainous debt of 180 percent of GDP cannot reasonably be repaid and that it needs some form of debt restructuring. The IMF has also insisted Greece must receive debt relief, but some European creditors, notably Germany, are more reluctant.