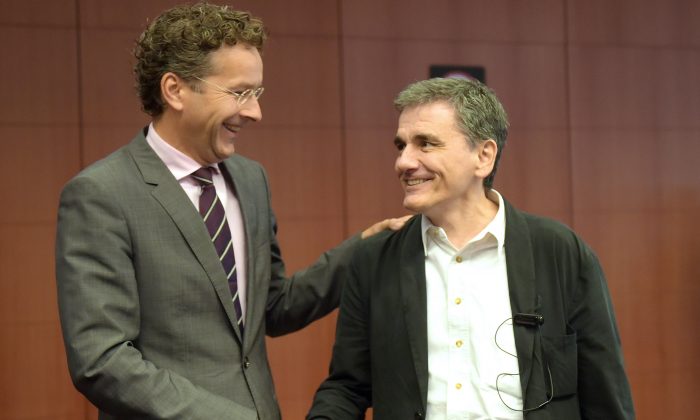 LUXEMBOURG—European creditors urged the re-elected Greek government to maintain its zeal for reforms so it can get billions more of bailout cash and start discussions on relieving the country’s debt burden.

After Monday’s meeting of the eurozone’s 19 finance ministers in Luxembourg, the group’s top official, Jeroen Dijsselbloem, said the Greek government has changed tack since it agreed to the three-year, $97 billion bailout in July.

“Maintaining that attitude for reform is crucial to regain trust in and outside Greece, so crucial for economic recovery,” Dijsselbloem said.

Dijsselbloem expressed his hope that the Greek government will get $2.1 billion in bailout cash by the middle of October once certain economic measures have been implemented. Dijsselbloem said Greece should be able to get a further 1 billion euros at the end of the month, once the next set of measures is agreed.

As a condition of the bailout—the country’s third since 2010—Greece has to overhaul its economy by reforming its labor markets, raising taxes, cutting spending and putting state investments up for sale. If it doesn’t, Greece would not be able to tap the bailout funds and again face the prospect of bankruptcy and an exit from the euro.

Greece will face a review to make sure it has made all the required measures.

A positive first review is crucial for Greece as it will trigger the next phase in the country’s rescue—cash injections for the crippled banks and discussions on how to lighten Greece’s debt load.

Greece has relied on bailout funds from its eurozone partners and the International Monetary Fund since the spring of 2010. Despite years of spending cuts and tax increases, the country is still not in a position to meet its debt commitments on its own. The economy is heading back into recession after the government imposed painful controls on money transfers in late June, when the country was struggling to conclude a deal with creditors and appeared headed for the euro exit door.

According to the country’s draft budget released Monday, Greece’s economy will remain in recession through 2016, contracting 2.3 percent in 2015, against initial forecasts for growth, and 1.3 percent next year.

The forecasts also show unemployment rising steadily over the next two years, reaching 25.4 percent this year and 25.8 percent in 2016. Last year, the unemployment rate was 24.6 percent, after reaching a peak of about 28 percent during Greece’s six-year financial crisis.

The Greek government is hoping that abiding by the terms of its bailout will pave the way to debt relief in the form of longer repayment periods and lower interest rates on its bailout loans from fellow eurozone countries. The most recent figures show Greece owed a little more than 300 billion euros at the end of the first quarter, which equates to just under 170 percent of its annual GDP.

The IMF has said Greece needs massive debt relief if it’s going to lend the country more money. It has suggested doubling the grace period on Greece’s loans from eurozone countries to 20 years and the subsequent repayment period to 40.

Because of Greece’s general election last month, which saw Tsipras’ left-wing Syriza retain power in coalition with the Independent Greeks, there are some concerns in the markets that Greece is behind schedule in its reforms.

However, finance ministers did not appear to be in a critical mood on Monday.

Wolfgang Schaeuble, the German finance minister who suggested earlier this year that Greece should be given a temporary opt-out from the euro currency, appeared conciliatory.

“It’s a little early to talk about delays. Rather, we will naturally await the first report and then we’ll see,” Schaeuble said.