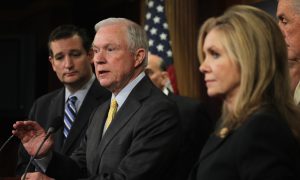 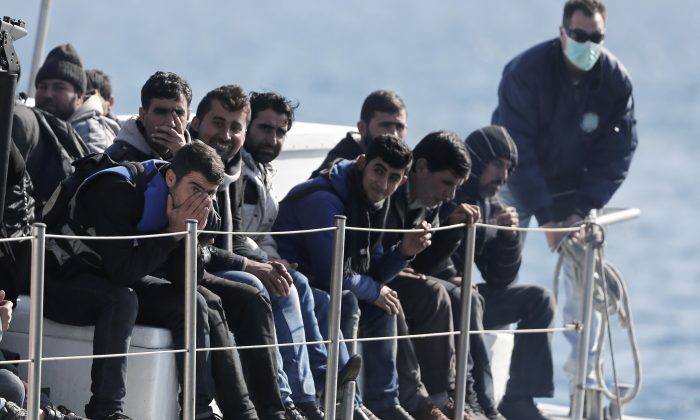 In this Nov. 27, 2014 file photo, a Greek coast guard officer in a mask for fear of infectious disease stands beside a small group of immigrants on a launch taking them to shore from a crippled smuggling ship carrying more than 700 people, at the coastal Cretan port of Ierapetra, Greece. (AP Photo/Petros Giannakouris)
Europe

ATHENS, Greece—Greece’s coast guard picked up nearly 2,500 migrants from the sea in dozens of search and rescue operations over the weekend, part of a relentless flow of people seeking the safety of Europe after facing war and poverty in the Middle East, Africa and Asia.

The coast guard said Monday it had rescued 2,492 people in 70 operations off the eastern islands of Lesbos, Chios, Samos, Agathonissi, Farmakonissi, Kos and Symi from Friday morning until Monday morning.

The coast guard also rescued another 13 people spotted in the water near Chios. One person was recovered unconscious and transported to a hospital. It was not clear how the group ended up in the water.

Greece has been overwhelmed by record numbers of migrants, the vast majority from Syria and Afghanistan, reaching its eastern Aegean islands from the nearby Turkish coast. More than 200,000 migrants have arrived this year.

Few want to remain in the financially stricken country, with nearly all heading to Greece’s northern border with Macedonia, crossing into Serbia and Hungary and on toward more prosperous European countries.

Authorities on the islands have struggled to cope with the sheer numbers of migrants. A government-chartered ferry on Monday brought 2,500 migrants to Piraeus, the main port near Athens, from Kos and Lesbos.

“It’s very bad in Mytilene,” the main town on Lesbos, Mohamad, a Syrian Kurd who would only give his first name, said as he disembarked from the ferry. “I stay five days in (the) street. No food, no anything.”

Another Syrian, Basar, who would also only give his first name, said the situation wasn’t that dire but that many people from other countries were claiming to be Syrian to take advantage of the refugee status Syrians automatically receive and the preferential treatment they perceive them as enjoying.