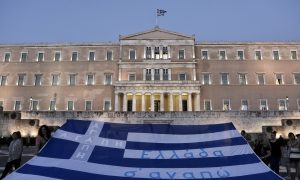 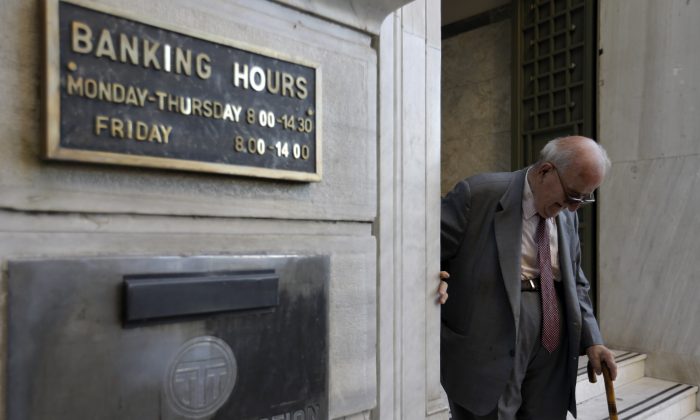 An elderly man leaves a branch of the National Bank of Greece in Athens, Monday, July 20, 2015. (AP Photo/Thanassis Stavrakis)
Europe

ATHENS, Greece—Greece set a series of landmarks Monday it hopes will shore up its battered economy following months of crisis that threatened its place in the euro.

Banks reopened after more than three weeks, and the cash-strapped country got a short-term loan from European creditors to pay more than 6 billion euros ($6.5 billion) owed to the International Monetary Fund and the European Central Bank. Non-payment on either would have derailed Greece’s recent bailout request.

For most recession-weary Greeks, Monday was all about the price of goods in the shops as new tax rises demanded by creditors on everything from coffee to taxis took effect. And though the banks may have opened, strict limits on cash withdrawals remained.

For an economy reeling from the recent uncertainty over the country’s euro future, the continuing controls on capital and the tax rises aren’t going down too well.

Dimitris Chronis, who has been running a small kebab shop in central Athens for 20 years, says the new taxes could push his business over the edge especially when combined with higher business taxes and meat prices.

“I can’t put up my prices because I’ll have no customers at all,” said Chronis, who said sales have slid by around 80 percent since banking restrictions were imposed June 29. “We used to deliver to offices nearby but most of them have closed. People would order a lot and buy food for their colleagues on special occasions. That era is over.”

There are few parts of the Greek economy left untouched by the increase in sales taxes on many basic goods from 13 percent to 23 percent. They have been imposed on many basic goods, from cooking oils to condoms, through to popular services, such as eating out at restaurants and ferries to the Greek islands.

The tax rises formed part of a package of confidence-building measures the Greek government had to introduce for negotiations on a third bailout to begin.

In response to last week’s vote in the Greek Parliament backing the austerity measures, the ECB raised the amount of liquidity assistance on offer to Greek banks, paving the way for Monday’s reopening.

The European Union also sent a three-month loan to Athens, with which it paid a 4.2 billion-euro debt due to the ECB and cleared its arrears of about 2 billion euros with the IMF.

Both institutions confirmed they had been repaid.

IMF spokesman Gerry Rice said the Fund “stands ready to continue assisting Greece in its efforts to return to financial stability and growth.”

The IMF is not directly involved in Greece’s request for a third bailout as its previous rescue runs until early next year. But it has expressed doubts on the measures that Greece’s European creditors are demanding without significant debt relief for Athens.

Greece has relied on bailout loans totaling 240 billion euros since 2010 after it was locked out of international money markets. In return for the cash, successive governments have had to enact harsh austerity measures to get the public finances into shape.

Though the annual deficit has reduced dramatically, the country’s debt burden has actually risen to around 180 percent of Greece’s annual GDP from 120 percent because the economy is around 25 percent smaller.

The green light to the opening of discussions, which are expected to last around a month, was given Friday. They will include economic targets and reforms deemed necessary in return for an anticipated 85 billion euros ($93 billion) over three years.

On Monday, the first easing saw banks reopen their doors for limited services. There were no reports of any problems.

Though the daily cash withdrawal limit stayed at 60 euros ($65), the government has given individuals a new weekly limit of 420 euros from this coming Sunday so they don’t need to trudge to the ATM every day.

Since the Greek parliament passed the austerity measures demanded, creditors have relieved the pressure on Greece, though the country’s acute difficulties were evident in the fact that the Athens Stock Exchange remains closed until further notice.

Further relief for Greece may come if lawmakers back another set of creditor-demanded measures on Wednesday.

Paying off the IMF and ECB will give Greece some breathing space but the country will need bailout funds to meet upcoming debts. Some of the bailout money will also go to restoring the financial health of the banks, which would help speed up the removal of the controls.

The agreement to open up bailout discussions has not gone down well in large parts of Tsipras’ radical left Syriza party, which was elected in January on a promise to end austerity. Cabinet-level dissenters were replaced Friday, but even their replacements have angrily denounced the new austerity measures.

“The government was obliged to make a tactical retreat to save the country,” new Labor Minister Giorgos Katrougalos said Monday. “This was the result of a soft, post-modern financial coup that was handled by the prime minister in a responsible way.”