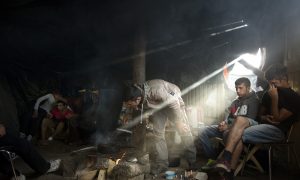 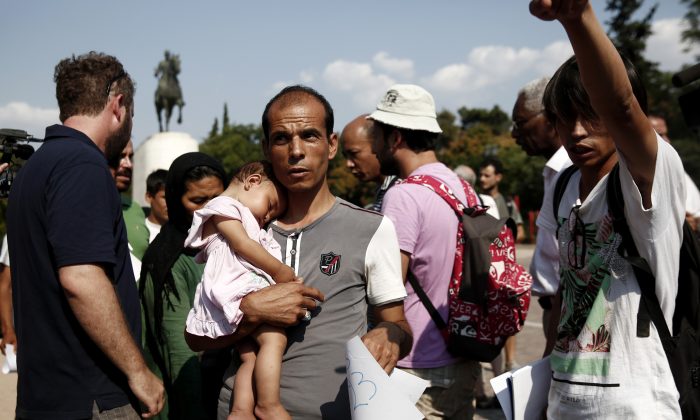 A migrant with his child makes his way to board a fire brigade bus to be transferred from a park to an organized camp which has been set up by the Greek state a few miles from the centre of Athens, Sunday, Aug. 16, 2015. Greek authorities say they have started resettling migrants living in tents in a park in the capital Athens, but many are wary of such a move and have moved to directions unknown thus far. (AP Photo/Yorgos Karahalis)
Europe

ATHENS, Greece—Greek authorities said Sunday they have started resettling migrants living in tents in a park in Athens, but many were wary and had moved out ahead of the operation.

Fire brigade buses moved the migrants, most from Afghanistan, to a settlement of 90 containers in the Athens district of Votanikos. Each can house six to eight people and has air conditioning, running water and a toilet.

The government has said it is not a detention center and everyone is free to come and go. However, police estimated that about a third of the park’s almost 300 tent residents, wary of such promises, packed their belongings and left earlier. Another 30 have refused to budge.

Police say a total of 171 were resettled Sunday, but many more live in other public spaces.

More than 130,000 migrants have reached Greece so far in 2015, straining the country’s resources.

“I am afraid that they are going to send us back to Afghanistan, I’m scared of being sent to a fenced place where I won’t be able to go anywhere,” said Zahra Mohseni, an Afghan migrant.

Others found the new settlement a welcome change from the park.

“It is so much better. The people who walk into their rooms are very pleased. There is a happy atmosphere, everything is beautiful and there are special places for little children to play or hang around, like small parks,” said Arash Himati, another Afghan migrant.

The settlement is far from other residences, but some feared that locals in Votanikos would object to the migrants in their midst, and the Greek media have played up the “locals protest” angle. About a dozen people turned up to protest and were kept at bay by police.