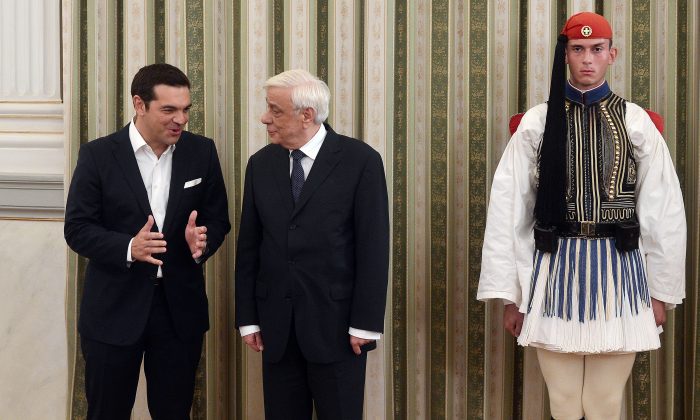 ATHENS, Greece—Greeks have elected Alexis Tsipras prime minister for the second time this year but with a strikingly different mandate: Instead of the vehemently anti-austerity platform he espoused in January, he has now agreed to implement yet more stringent spending cuts and tax hikes.

The 41-year-old left-wing leader, who was sworn into office on Sept. 21, pulled off the remarkable gamble he took when he resigned in August, barely seven months into his four-year term, triggering elections to face down a rebellion within his Syriza party over his policy U-turn in accepting more austerity in return for a third bailout for Greece.

But now he must implement deeply unpopular measures of the sort he made his political career railing against.

Tsipras was re-forming his previous government with his former coalition partner, the small right-wing populist Independent Greeks who narrowly made it into Parliament in seventh place in Sunday’s election. Their administration, to be announced on Tuesday, will have a narrow majority of 155 seats in the 300-member legislature.

Crucially, however, Tsipras no longer has to worry about the hard left radicals within his own party who triggered his previous government’s demise by voting against him on Greece’s bailout, costing him his parliamentary majority. The new anti-bailout party they formed did worse than they expected on Sunday, failing to win any parliamentary seats.

The pro-bailout parties now control at least 258 seats, with the anti-austerity camp reduced to the Nazi-inspired Golden Dawn, which came in third place, and the Communist Party.

“The splintering of the more vehemently ‘anti-memorandum’ faction of Syriza and the renewed electoral mandate for Prime Minister Alexis Tsipras reduces the immediate political uncertainty that had arisen with the decision to call snap elections,” said the Fitch ratings agency, referring to the memorandum of understanding signed for the bailout. “It should also be possible to continue to rely on the votes of some of the centrist parties for key reforms, if necessary.”

Tsipras won the election with ease, getting 35.5 percent of the vote and leaving the conservative New Democracy party trailing with 28.1 percent. But voter turnout was at a record low, with nearly 45 percent abstaining in a country with traditionally high turnout. Election fatigue played a part, with this being the third national vote this year, after the January election and a July referendum in which Tsipras successfully urged Greeks to reject creditor reform proposals.

Others saw little to choose from in the election, as whoever was victorious was still bound by the bailout terms to implement the deal.

The election results “were disappointing, and I am pessimistic, because we already knew which line of politics would be followed; the politics of the third (bailout),” said Athens resident Nikos Georgopoulos. “So we know that there is nothing good for the Greek people to wait for.”

Tsipras’s new government now has its work cut out for it—and it can afford to waste little time.gree

Not only must it start implementing painful austerity measures, including an overhaul of the pension system, increased taxation for farmers, and producing a budget for 2016, but it also has to deal with the growing refugee crisis that has hammered the country.

More than 260,000 refugees and migrants have entered Greece so far this year, with hundreds more arriving each day. Although the vast majority don’t want to stay in Greece and head north to more prosperous European countries, Greek authorities must still handle the new arrivals. Overstretched island authorities have struggled to provide adequate shelter and food, and long delays in registering the newcomers has led to severe overcrowding and occasionally violent demonstrations.

It will take time for trust to be restored between Greece and its creditors, which increases the risk of delayed program reviews.
— Fitch

One of his first appearances in his newly elected post will be in Brussels on Wednesday to attend a European Union summit on migration.

But it is the handling of the bailout—a three-year 86 billion euro ($97 billion) package of rescue loans—and its accompanying austerity measures that is likely to be the new government’s biggest test.

Greece’s European creditors have made clear they expect the deal to be implemented in full. A review by creditor representatives is expected next month, and the country still has stringent banking restrictions introduced to prevent an all-out bank run in late June.

Tsipras has made no secret of the fact he disagrees with the bailout. He has argued its conditions are too harsh, but said he had no choice but to accept them as the alternative would have been bankruptcy and a potentially disastrous Greek exit from Europe’s joint currency. He has pledged to soften the blow as much as he can and negotiate for alternatives where possible.

“I think that the most important (thing) is that we are now able to design a long-term plan,” Tsipras told Independent Greeks head Panos Kammenos during a meeting Monday to discuss the new government makeup.

“We now have a big opportunity, with stability and within a four-year (term), to implement our basic commitment, which is to give the honorable fight—and bleed if needed—in order for our people to stop bleeding.”

It is talk that makes analysts and markets nervous.

“Political rhetoric still contains an anti-austerity element notwithstanding Syriza’s official commitment to implement the program,” the ratings agency said, adding that “it will therefore take time for trust to be restored between Greece and its creditors, which increases the risk of delayed program reviews.