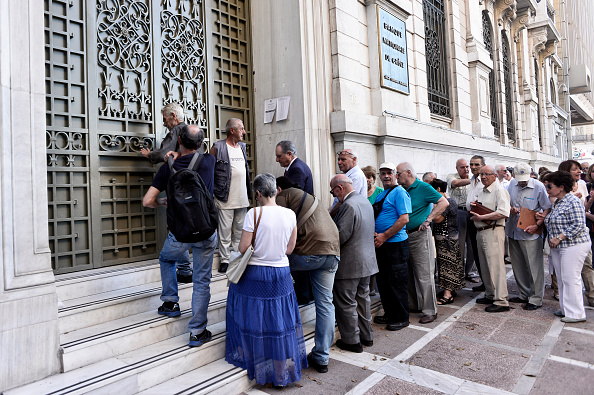 Greece’s Plan to Return to Markets While Viable Faces Risks

Greece is planning a return to the markets in a bid to regain its status as a “normal” country.

If the government can announce by the end of the year its program for tapping the markets in 2019 and repeat this exercise each year for the following 12 months, the plan will have worked, an official familiar with the matter said.

After losing more than a quarter of its economic output during the past decade, Europe’s most indebted country is now trying to stand on its own feet again. The target is for the country to issue no more debt than what matures each year, the official said, requesting anonymity as discussions are still ongoing.

For 2019, debt maturities are around 10 billion euros to 11 billion euros ($11.7 billion to $12.9 billion), while for the following two years the amount falls to 5 billion euros, according to Public Debt Management Agency data. This also means that Greece will not have to issue more than two or three notes a year, and if there is a need for more, then the nation can re-open a previous issuance, the official said.

“There is still work to be done in order to regain investor confidence and full access to the markets,” said Dimitris Dalipis, head of fixed income at Alpha Trust Mutual Fund Management SA in Athens. “However, progress has been made and the market is appreciating this as is evident by price movements following the June 21 Eurozone agreement.”

Yields on Greek notes are attractive for both sides, with the seven-year bond trading under the level of its issue in February, but with yields still high compared with other euro-area notes. This September could provide a good opportunity for Greece to issue its next bond, a second official said, asking not to be named as decisions are not final yet.

Having issued a seven-year bond in 2018 and a five-year note in 2017, now is the time to examine the possibility of issuing a 10-year or a three-year note, both officials said. Greece doesn’t need to raise significant amounts of money, as it has no need for cash.

“Higher yields in euro can entice investors to the market despite the limited liquidity,” Dalipis said. “This won’t necessarily mean however that full normality and market access is restored.”

The plan for a sustainable return to markets faces two major challenges.

First, Greek authorities have to stick to their commitments and implement what has been agreed on with creditors so they won’t lose the credibility that the conclusion of bailout program has created.

The second risk is political. Early in 2019, the government may lose its parliamentary majority if lawmakers are called to approve the name deal with the Former Yugoslav Republic of Macedonia.

“A combination of internal and external risks could hurt Greece’s market access over the coming months,” said Mujtaba Rahman, managing director at Eurasia Group in London. “The politics around the Macedonia deal will keep the possibility of a government collapse or an early election on the table” while “from Europe, the impending standoff between the European Union and Italy over Rome’s budget could, in a tail scenario, present spillover risks to Greece.”

The government’s aim is to broaden the investor base and not to raise funds, as Greece has secured its debt redemption until 2022. The idea is that new debt will be fully collateralized with cash from the buffer of 24.1 billion euros that has been created, the first official said, explaining that Greece now has to show that it is a “frequent issuer” before anything else.

While Greece may not be in a rush for cash from international investors, the country would like to raise funds in order to use liquidity to proceed with further restructuring of the debt portfolio. This can be done through buying back part of existing debt in order to have larger part of the country’s debt with longer maturities and under a fixed coupon.

“Patience may prove to be a virtue in the case of the new issue of Greek government bonds,” said Petros Mylonas, head of Southern Europe at LXM Group in London.“Investors want to see that Greece’s debt is much more insulated against the vulnerabilities of the past before the country can enjoy a sustainable return to the bond market, time may prove the best ally for this.”