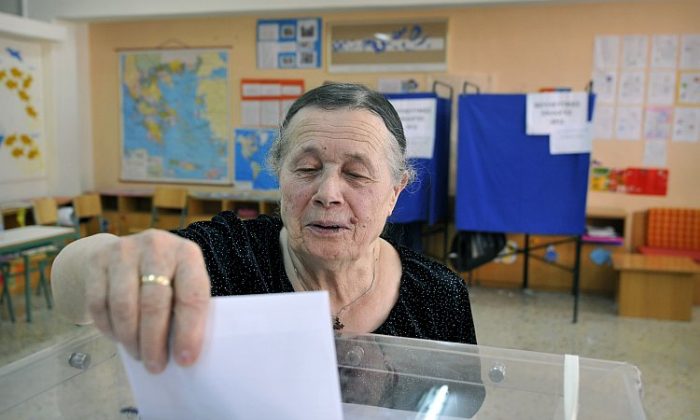 A woman casts her vote for Greece's general elections in a polling station in Athens on May 6, 2012. (Louisa Gouliamaki/AFP/GettyImages)
Europe

Greece’s Architects of Austerity Punished at the Polls

Greek voters went to the polls Sunday, delivering huge losses to both main parties that have ruled the debt-ridden country for decades.

The New Democracy (ND) and Panhellenic Socialist Movement (PASOK), finishing first and third respectively, combined to earn only about 33 percent of the vote—compared to 77.4 percent in 2009.

Yet despite the clear reprimand from voters, until the last votes were counted, the ND-PASOK still had a chance to eke out the 151 seats needed to form a government. With almost 93 percent of votes counted, they were looking to take 109 and 41 seats respectively, just one seat shy of a majority in the 300-seat Legislature.

The big story of the night was the splintering of the vote as Greeks sought alternatives to the traditional parties. A total of seven parties won seats in Parliament, compared to five in 2009.

During the campaign, many Greeks expressed frustration with the two traditional parties.

“These elections are the first time I’ve wanted to vote. … I want my vote to count. … I will not vote for any of the two [major] parties” said Iliana, 24, a psychologist, who lives in a suburb of Athens, on Sunday.

There have been many protests in Athens, some descending into riots, over the cuts.

“This year I am not going to vote for PASOK as I did in all other years. This year I will vote for LAOS,” said Sofia, a retired English teacher. LAOS, the right-wing Popular Orthodox Rally, did not do well at the polls, but many of the other smaller parties did.

The Coalition of the Radical Left, Syriza, took second place with around 16.6 percent or 51 seats. In 2009, Syriza was the fifth party in the House attracting less than 5 percent of the popular vote.

Tsipras said austerity measures supported by German Chancellor Angela Merkel “have suffered a crushing defeat,” according to the Ekathimerini publication.

He added that his party would attempt to create a coalition to “abolish the memorandum” and said the austerity measures “have been undermined by the popular mandate.”

Fourth place was taken by the Independent Greeks, a vehemently anti-bailout party, but this time on the right. It was formed a few months ago by ousted ND member of Parliament Panos Kammenos, who thinks the bailout packages were akin to treason.

The rest of the seats went to the Greek Communist Party (26), and the neo-Nazi Golden Dawn Party (21), which is mainly focused on a platform of expelling illegal immigrants from Greece. Golden Dawn surged from 0.3 percent of the vote in 2009, to nearly 7 percent on Sunday.

The seventh party is the Democratic Left (19), formed since the 2009 election, which also does not approve of the bailout deal.

PASOK leader Evangelos Venizelosm said that there was not a clear mandate for any single party in Greece, and called for a national unity government with pro-EU parties.

“We embittered the people to protect the future of the nation. History will judge,” Venizelos said, according to the Athens News.

Sunday’s vote was the worst showing for PASOK since the early 1970s.

“We are back to where we started in 1974,” Pasok Member of Parliament Petros Efthimiou was quoted as saying.

With reporting by Alex Johnston.