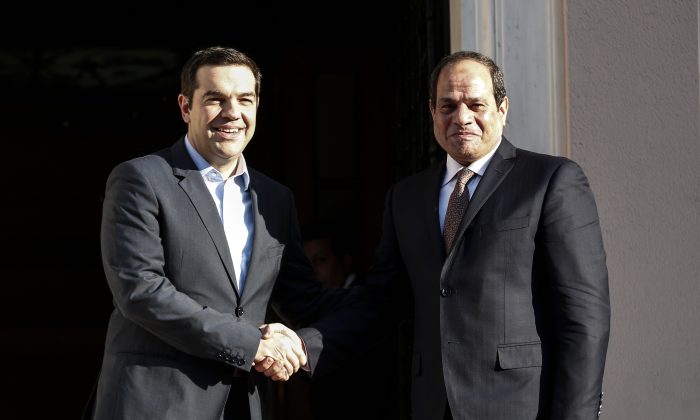 “There are enormous opportunities for cooperation between the two countries—opportunities that did not previously exist,” Greek Prime Minister Alexis Tsipras told a gathering of Greek and Egyptian business people.

In August, Italian energy giant Eni announced the discovery of what it described as one of the world’s biggest natural gas fields off the Egyptian coast.

Greece, hammered by recession for most of the past seven years, is seeking involvement of its companies in shipping, energy and construction contracts. The two leaders on Tuesday signed a port cooperation agreement.

They will be joined in Athens Wednesday by Cypriot President Nicos Anastasiades for a third round of three-nation talks, expected to be dominated by the exploitation of Mediterranean gas deposits and regional security.

Police in Athens provided tight security for the former Egyptian military chief, who came to power following a coup 18 months ago and whose regime has been strongly criticized by international human rights groups.

Egyptians living in Athens held small, peaceful rallies in support of, and in opposition to, el-Sissi.