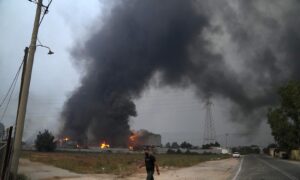 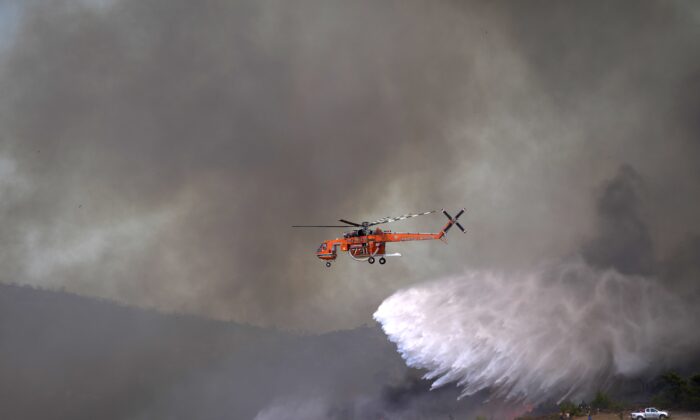 Greece has been roiled by hundreds of wildfires this month. Other Mediterranean countries—Turkey, Italy, Algeria, and Spain among them—have suffered similar problems.

The worst of the two blazes that erupted Monday was in the Vilia area northwest of the Greek capital, which triggered an evacuation alert for eight villages. Greece’s minister for public order, Michalis Chrysochoidis, said the flames were coursing through a densely forested area with scattered villages, none of which were in direct danger.

“We are trying to stop the fire from spreading” towards the nearby large village of Vilia, he said.

That blaze was being fought by 240 firefighters—including 143 from Poland—supported by eight water-dropping planes and nine helicopters.

Another fire broke out earlier in the Keratea region southeast of Athens, burning shrubland and threatening a national park in the Sounion area. Three communities were ordered evacuated. Some residents desperately drenched their homes, while volunteers with hoses and branches helped fight the fires. More than 100 firefighters, eight water-dropping planes, and 11 helicopters were striving to contain the blaze, which appeared to be on the wane by evening.

“Right now the situation there has improved, there are scattered active fires within the perimeter and efforts are continuing to contain them,” Chrysohoidis said.

Local mayor Dimitris Loukas told Greek television that authorities were investigating reports of arson. He said residents had seen someone in a car setting a dumpster on fire.

The fire service said 45 wildfires erupted across the country between late Sunday and late Monday. Most were quickly contained.

Two major fires in Greece that began in early August, one on the island of Evia and another in a national park north of Athens, were still smoldering Monday, and firefighters were trying to secure their perimeters. On Evia, water-bombing planes were deployed to assist ground forces.

On Monday, Greece’s civil protection chief, Nikos Hardalias, who coordinates the fight against wildfires as well as the country’s response to the coronavirus pandemic, was taken to an Athens hospital where he underwent unscheduled heart surgery. A health ministry statement said the operation was successful.

Weeks of wildfires have stretched Greece’s response capabilities to the limit. About two dozen European and Mideast countries sen crews, aircraft, and vehicles to help. Most have left, although 40 Austrian firefighters remained in the southern Peloponnese region, where two major fires have been burning for days.

Several other Mediterranean countries have suffered intense heat and quickly spreading wildfires in recent weeks, including Algeria, where wildfires killed at least 75 people; Turkey, where at least 16 people have died and Italy, which saw several fire-related deaths.