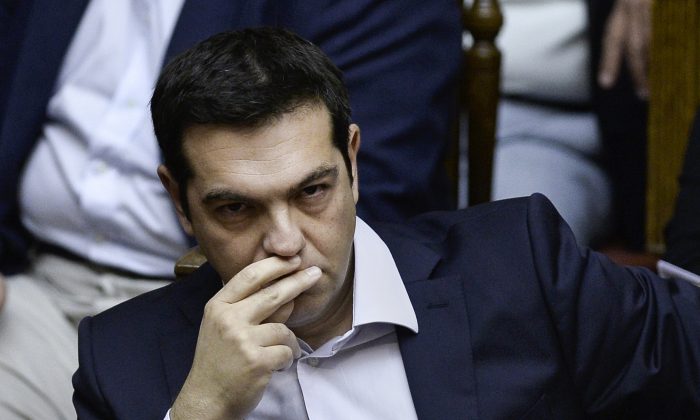 Greek Prime Minister Alexis Tsipras attends a parliamentary session in Athens on June 27, 2015. Greece will hold a referendum on July 5 on the outcome of negotiations with its international creditors taking place in Brussels on June 27, PM Alexis Tsipras announced. (Angelos Tzortzinis/AFP/Getty Images)
Europe

Greek Prime Minister Alexis Tsipras is gambling the future of his 5-month-old left-wing government on the snap poll — insisting that a “no” vote would strengthen his hand to negotiate a better deal with the country’s creditors, and a “yes” would be a capitulation to their harsh demands.

The opposition accuses Tsipras of jeopardizing the country’s membership in the eurozone and says a “yes” vote is about keeping the common currency.

Tsipras’ high-stakes standoff with lenders— the European Union and the International Monetary Fund — resulted in Greece defaulting on its debts this past week and shutting down banks to avoid their collapse, and lose access to billions of euros after an existing bailout deal expired.

The sense of urgency was palpable all week when Greeks struggled to decipher a convoluted referendum question while being bombarded with frenzied messages of impending doom or defiance.

A series of polls published Friday at the end of a frantic weeklong campaign showed the two sides in a dead heat, with an incremental lead of the “yes” vote well within the margin of error. They also showed an overwhelming majority of people — about 75 percent — want Greece to remain in the euro currency.

Aris Spiliotopoulos, a 22-year-old who is launching his own tourism start-up, said he believes the vote is about whether Greece choses to stay among the club of nations that uses the euro as their currency and ultimately whether the country opts to stay in the European Union itself.

“I am voting ‘yes’ because I believe that my future and even my kids’ future, in twenty or thirty years from now, is in the eurozone and the European Union,” Spiliotopoulos said on the eve of the referendum.

Gym teacher Alkiviadis Kotsis said he is voting “no” because the country and its people simply can’t take more austerity.

“No matter how many loans you take, you cannot get by if you don’t produce things. You can’t do anything,” he said.

No matter the referendum result, Tsipras faces a tough road ahead, fraught with uncertainty about whether he will be able to deliver an improved bailout agreement.

A “yes” win won’t mean a road to the negotiating table strewn with roses either, but would likely usher in a new government with a shot at negotiating an improved deal, Kalyvas said.

He said if the European Union wants to keep Greece in the eurozone, it will have to come up with “a very generous plan” since the cost of the crisis has shot up to unanticipated levels.

That was borne out by German Finance Minister Wolfgang Schaeuble, who told daily Bild on Saturday that future negotiations between Greece and its creditors will be “very difficult,” because the country’s economic situation has worsened dramatically in recent weeks.

Schaeuble repeated the German government’s position that for a community like Europe to work, all countries need to abide by the rules.

Meanwhile, Greece’s Finance Minister Yianis Varoufakis launched a salvo at other eurogroup nations, accusing them of holding out on a bailout deal to allow bank coffers to run dry so they could spring a “vile ultimatum” on the government to accept what he called a humiliating deal.

Varoufakis said accepting the creditors’ terms would be a “permanent condemnation” while rejecting it would offer the “only prospect for recovery.”

With speculation swirling on the referendum’s impact on Tsipras’ government, Greece’s Deputy Prime Minister Yiannis Dragasakis denied media reports that he would accept to lead a new “grand coalition” government.

“The country has a prime minister who will have an even stronger popular mandate and support. I will serve this mandate on my part,” he said in a statement.