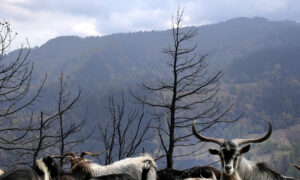 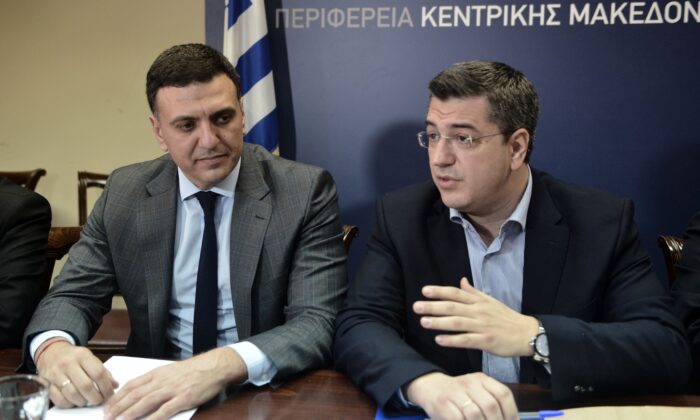 Governor of Central Macedonia region Apostolos Tzitzikostas (R) speaks next to Greek Health Minister Vassilis Kikilias (L) during a meeting in Thessaloniki, in the region of Central Macedonia, on Feb. 26, 2020. (Sakis Mitrolidis via Getty Images)
Europe

Greece’s Health Minister Vassilis Kikilias announced a new package of public health measures on Tuesday for those who have not been vaccinated against the CCP virus.

Health care and care home workers who refuse the COVID-19 vaccine will be suspended from work starting on Sept. 1, Kikilias said, noting that unvaccinated workers would not get a grace period for a previously announced suspension.

From Sept. 13 until March 31, the minister of health announced that every private and public sector worker without a certificate proving vaccination or recovery from the CCP (Chinese Communist Party) virus within the last six months will have to undergo one rapid test per week.

Two tests per week will be required for those working in academia, tourism, restaurants, cafes, bars, and in television, movie, theater, and musical productions.

In addition, also effective on Sept. 13, the government will stop providing free COVID-19 tests and will charge 10 euros (about $12) for a rapid test—a considerably large amount for workers in some of these sectors in a country hit by an economic crisis.

Kikilias also said indoor restaurants, cafes, bars, clubs, and entertainment venues will only be accessible to those who are vaccinated or recently recovered, with checks conducted at the entrance through an app that scans the certificates to verify them.

Masks will be mandatory for all, both vaccinated and unvaccinated, in indoor public areas and in crowded outdoor areas.

Those who are non-compliant with the new measures will be penalized, which includes suspension of work, non-attendance at schools, or getting banned from traveling.

The set of rules were announced as Kikilias said that hospital data for the past two months show that about 90 percent of patients in Greece’s ICUs for the CCP virus are not vaccinated.

“Unlike in autumn last year, when humanity was confronted with COVID-19 without other defenses apart from the known protection measures, this autumn each of us can protect themselves and protect others,” Kikilias said at a press briefing at the Ministry of Health on Tuesday.

“These measures are not punitive,” he added. “They are our duty to all those who went through 18 months of the pandemic carefully, those who lost their shops, jobs, had to work from home to protect themselves.”

According to government data, Greece has recorded 13,385 deaths since reporting its first CCP virus outbreak in February 2020 and about six million people (55.69 percent) in the country have received one or two doses of a COVID-19 vaccine.