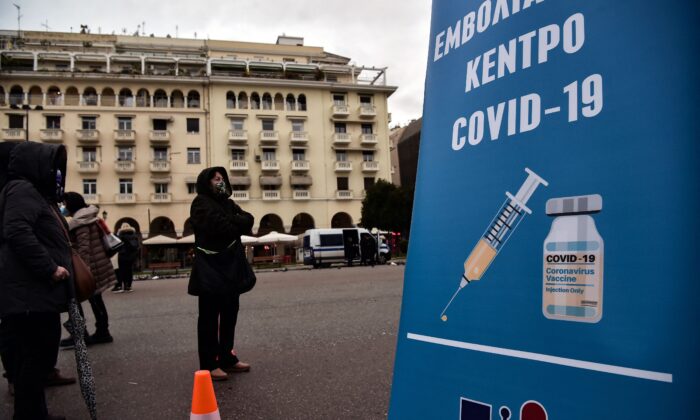 Patients in line to get vaccinated against COVID-19, in Aristotelous Square, in the center of Thessaloniki, Greece, on Nov. 26, 2021. (Sakis Mitrolidis/AFP via Getty Images)
WORLD

Greece said on Tuesday that citizens aged 60 and over who don’t comply with a new government-imposed COVID-19 vaccination mandate by Jan. 16 will face a recurring monthly fine of 100 euros ($113).

Prime Minister Kyriakos Mitsotakis said that his decision to implement the measure, announced on Nov. 30, “tormented” him personally, but it was necessary for the “protection of our fellow citizens.”

“It is not a punishment,” Mitsotakis said. “I would say it is a health fee,” he added, explaining that the government will use the money collected from the fines to finance Greek hospitals fighting the CCP (Chinese Communist Party) virus pandemic.

“Those over 60 who have not been vaccinated will have to make an appointment by Jan. 16, otherwise a fine of 100 euros will be imposed,” the premier said, according to GreekReporter.com. “The fine will be issued by the Authority for Public Revenue (AADE) and this money will be collected in a special fund that will finance our hospitals.”

SYRIZA, Greece’s main opposition party, criticized Mitsotakis for the new measure, saying it is punitive and financially excessive, pointing out that no other country in the world has enforced such rules on its citizens.

“The perpetrator of the health disaster, in a panic [caused by] the total collapse of the national health system and the pitiful European ‘lead’ in deaths and COVID-19 cases, instead of assuming responsibility, once again shunts it onto the citizens,” it said.

SYRIZA accused Mitsotakis of “targeting those over 60,” explaining that instead of implementing “measures of punishment and economic annihilation,” the government should focus on rules that support the national health system, encourage COVID-19 vaccinations, and tighten health protection measures.

Mitsotakis said officials decided to make the shot mandatory for the elderly due to health ministry data showing there are 520,000 people over the age of 60 who have not gotten the jab.

“Lives will be saved by this decision. Vaccination saves lives,” the leader stated. About 63 percent of Greece’s 11 million population is fully vaccinated.

At the time, Mitsotakis told the nation in a televised address to “get vaccinated,” and claimed the CCP virus pandemic is one “of the unvaccinated.”

The country’s health ministry has recorded 931,183 infections and 18,067 deaths since the start of the pandemic nearly two years ago.