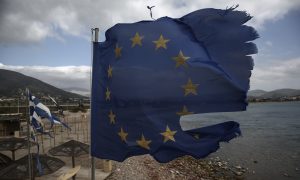 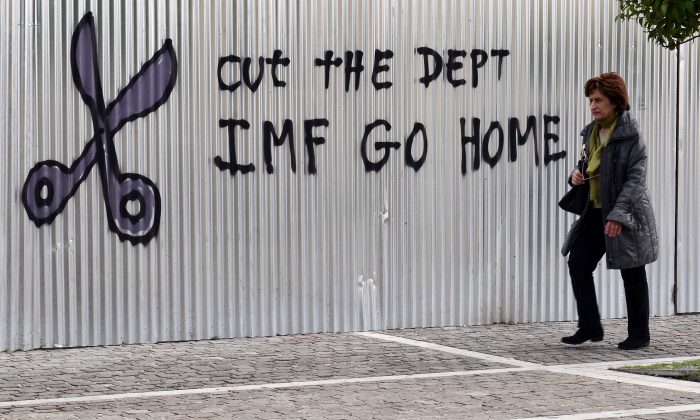 A woman walks past a slogan in central Athens on January 21, 2015. Greece has Plan A and Plan B, it needs a plan C as well. (Louisa Gouliamaki /AFP/Getty Images)
Business

Since Greece’s new government under Alexis Tsirpas came into power in January, it has been trying to strongarm the nation’s creditors (mostly the European Union and the International Monetary Fund) into relaxing their austerity requirements. More recently, Greek citizens have gotten into the act, seeking to protect themselves while gaming the EU financial system.

Now Hans-Werner Sinn, a professor at Munich University and president of the Ifo Institute of Economic Research, said Greek private citizens have also borrowed money from other EU central banks (far beyond the official sector debt).

They are using these sums as leverage in case something goes wrong, and Greece is allowing them to do so to strengthen its bargaining position.

“The Greek government is driving up the costs of Plan B [euro exit] for the other side, by allowing capital flight by its citizens. If it so chose, the government could contain this trend with a more conciliatory approach, or stop it outright with the introduction of capital controls. But doing so would weaken its negotiating position, and that is not an option,” Sinn writes.

They can do this because of a flaw in the eurosystem, the way individual countries’ central banks work together. The creators of the system have designed a closed loop between individuals banks and their respective central banks, which works well as long as the system is working.

If a Greek person transfers money from Greece to Germany, the following things happen: The transfer creates a hole in the Greek bank’s funding structure, which is plugged by the Greek central bank. The funding for the Greek central bank has to come from the eurosystem, in this case the German Bundesbank. The German Bundesbank on the other hand has to provide less funding for German banks because they now have the Greek deposits and the circle closes.

Unfortunately for the system, private Greek citizens are doing two things. One, they are withdrawing money hand over fist and stashing it under their mattresses, sometimes more than a billion euros per week.

Second, they are transferring deposits to other countries in the eurozone or even taking out loans to do so. This amount reached 99 billion euros at the end of April, according to Sinn. This is about one-third of Greece’s public sector debt.

Sinn explains: “A Greek exit … would leave those countries’ central banks stuck with Greek citizens’ euro-denominated claims vis-à-vis Greece’s central bank, which would have assets denominated only in a restored drachma. Given the new currency’s inevitable devaluation, together with the fact that the Greek government does not have to backstop its central bank’s debt, a default depriving the other central banks of their claims would be all but certain.”

So in case the infamous Plan B actually happens and Greece exits the euro, the EU would be stuck absorbing losses not only of the official sector, but of the private sector as well. The IMF would not have to absorb private sector losses because it doesn’t back the eurosystem.

Greece’s government has established this position by exploiting the rules. However, what they haven’t taken into account is the fact that rules tend to change very abruptly in times of upheaval, or will be interpreted differently. In the case of a Greek default, who will guarantee that Greek bank accounts won’t be frozen and/or confiscated?

Certainly in the so called T2S Framework Agreement, the ECB has set forth provisions for extraordinary circumstances or “force majeure.” Time for Greek citizens to prepare a plan C.