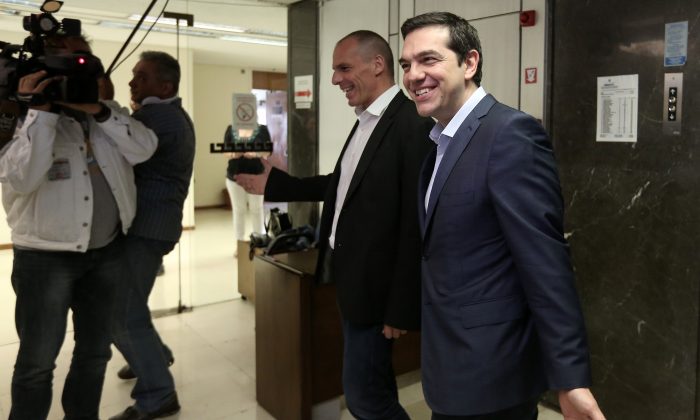 Greece's Prime Minister Alexis Tsipras, right, is welcomed by Finance Minister, Yanis Varoufakis, during his visit at the Finance Ministry in Athens Wednesday, May 27, 2015. (Costas Baltas/InTime News via AP)
Europe

ATHENS, Greece— Greece has submitted a proposal for an agreement with its bailout creditors, the prime minister said Tuesday, as the country seeks a deal that will unlock desperately needed rescue money.

Alexis Tspiras said it was now up to the leaders of Europe, who are Greece’s main creditors, to accept a deal or risk potentially disastrous consequences for the region.

But the European Union said the sides were “not there yet.”

Without more rescue loans, Greece could default on its debts this month and eventually even drop out of Europe’s currency bloc, a step that would push Europe and the global economy into uncharted territory.

“It is now clear that the decision for whether they want to adapt to realism and emerge from the crisis without the division of Europe … belongs to the political leadership of Europe,” Tsipras said.

For four months, Greece and its creditors have been locked in a standoff over what reforms the country needs to make to get more loans.

Tsipras gave no specifics of what was included in the proposal, which he said was submitted Monday night to the European Central Bank, International Monetary Fund and European Commission, the EU’s executive.

That same night, the leaders of Germany, France, the IMF, ECB and European Commission held an emergency meeting about Greece in Berlin. It was unclear whether Greece had submitted its proposal before the leaders met.

EU spokeswoman Mina Andreeva said Tuesday that Greece and its creditors still needed to do more work to reach a deal.

“The main message is that we are not there yet,” she said.

Time is of the essence. Greece must repay a total of about 1.6 billion euros ($1.8 billion) to the IMF this month, with the first installment of 303 million euros due Friday.

It is uncertain whether Greece has the money to pay Friday’s debt unless it gets a deal with creditors that will unlock the final 7.2 billion euros ($8 billion) of its five-year bailout program.

Greece has survived without rescue loans since last summer. As cash ran out in recent weeks, it managed to repay its debts by scraping together reserves from state enterprises, including embassies abroad and schools.

There have been suggestions Greece could seek to bundle all the money it owes the IMF this month into one payment on June 30 — an option permitted under IMF rules but rarely used. Taking that route could buy more time to secure a deal with creditors, although Athens has not indicated it is considering it.

Tsipras’ government, a coalition of his radical left Syriza party and a small nationalist party, was elected in January on promises of repealing the deeply resented budget austerity measures that have accompanied its bailout.

“We have made concessions because a compromise requires concessions,” Tsipras said. “We know these concessions will be difficult but we have submitted a realistic proposal for Greece’s exit from the crisis.”

Speaking earlier in the day, Labor Minister Panos Skourletis said Athens had given as much ground as it could. “I believe the Greek government has made the maximum level of concessions — there is no margin left. No margin,” he said on Skai television.

Europe’s Economics and Financial Affairs Commissioner Pierre Moscovici said during an interview with France Inter radio on Tuesday that talks were fruitful, though there was more work to be done.

He said progress had been made on reforms to value added tax and the establishment of an independent tax agency, as well as administration reform, non-performing loans and pensions.

He indicated that talks could continue past Friday, however.

“In the few weeks that are coming up we have to find a solution,” Moscovici said.

Speaking earlier, Deputy Prime Minister Yannis Dragasakis said Greece was “ready to respond to whatever is asked of it” to reach an agreement, but that Athens would not accept an ultimatum from its creditors.

Tsipras has also faced criticism from hardliners from within his party, who believe Syriza must stick to its pre-election pledges.

Some have suggested Greece not repay debts if the country’s creditors don’t back down from the issues the government considers its red lines — namely cuts to salaries and pensions.