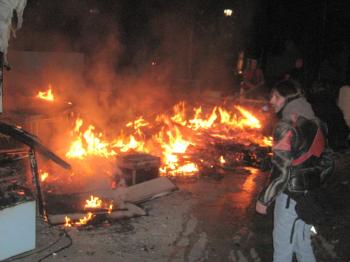 Greece on Fire With Riots

Neli Sfigopoulou
View profile
Follow
biggersmaller
Print
ATHENS—After the death of a 15-year-old boy, Alexandros Grigoropoulos, who was shot by a police officer in the neighborhood of Exarcheia, Athens apparently has been transformed into a battlefield in a war between police officers and anarchists in Greece. Athens, Thessaloniki, Larissa, and other Greek cities are suffering considerable damage, as rioting youths set waste containers on fire, as well as apartment buildings, construction sites, banks, offices, stores, and shopping centers. They have also attacked cars, homes and libraries.

In central Athens, police used tear gas to battle the rioters who are armed with stones, Molotov cocktails and incendiary devices. Physical fights have broken out. Police appear on the defensive and the anarchists are running wild, burning whatever they find. The most severe damages are in Athens and Thessaloniki where there are more numbers of youth gangs. Passersby have been taken to the hospital after having fallen ill from the choking tear gas and smoke from the fires.

On Tuesday morning Prime Minister Costas Karamanlis, President Karolos Papoulias and other high-level Greek officials are expected to hold a meeting to discuss the situation. Tuesday evening is the dead teenager's funeral.

A general strike has been declared until Wednesday, and schools and universities will be closed. People are concerned about when the situation will end and how extensive the damage will be.

The media have accused Greece's conservative government with inaction and questioned why police officers are not doing much to stop the riots.