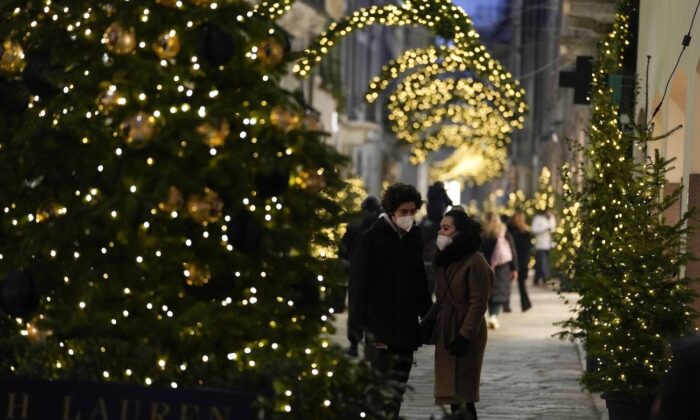 The governments of Greece, Italy, and Spain have reimposed outdoor mask mandates and introduced some new COVID-19 rules ahead of Christmas, citing the spread of the Omicron variant.

Greece announced new restrictions on Thursday that include requiring people to wear masks for all outdoor and public areas. Meanwhile, double-masking or more protective filtering facepiece (FFP2) masks will be required for public transport and supermarkets.

“Due to the large amount of Christmas activity and crowded conditions that it creates, the mandatory use of masks is fully justified,” Greek Health Minister Thanos Plevris said.

The restrictions, to take effect on Friday and remain until at least Jan. 3, also ban all public events to celebrate Christmas and New Year.

Greece will also strongly recommend incoming travelers to have follow-up COVID-19 testing—rapid testing or PCR—on the second and fourth day after their arrival, in addition to the already-mandated negative COVID-19 test to enter the country.

Over in Italy, Health Minister Roberto Speranza said masks will be compulsory outdoors again. Silvio Brusaferro, who heads Italy’s national health institute, said the Omicron coronavirus variant would be dominant by next week.

The government is also requiring the more protective FFP2 masks to be worn for all public transport, as well as cinemas, theaters, and sports stadiums. Previously, a mask mandate was in place for public indoor settings and public transport.

Italy also tightened restrictions on people who are unvaccinated against COVID-19; they will be banned from public spaces such as museums, exhibitions, amusement parks, bingo parlors, and betting halls. Until now, they were able to enter these venues with a negative test.

The COVID-19 unvaccinated will also be completely barred from being served in restaurants. Previously, they were already banned from seated dining but were able to be served standing at a bar.

The Italian government has also banned concerts and open-air events until the end of January. Discos and nightclubs will also be banned until then.

The new regulations will be gradually implemented starting Friday. No rules have been set for private gatherings.

The Italian government separately said it will reduce the booster shot wait time requirement after a person’s second shot from five months to four.

Meanwhile, COVID-19 “green” passes that people use to access various locations, including workplaces, will from Feb. 1, 2022, only be valid for six months rather than nine at present. The passes become valid after a person has been vaccinated or has recently recovered from COVID-19.

The change in policy reflects an acknowledgment by Italian ministers that vaccine effectiveness decreases with time, reported RTÉ.

In Spain, the government on Thursday approved a decree to mandate mask outdoors again. An outdoor mask mandate was lifted in June.

Indoor mask-wearing continues to be mandatory in the country.

Spain’s Health Minister Carolina Darias said there are exceptions to the temporary mandate—”if we’re in the countryside, at the beach, or in natural space where we can keep a distance of 1.5 meters if members aren’t from the same household.”