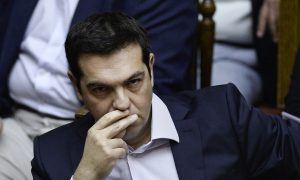 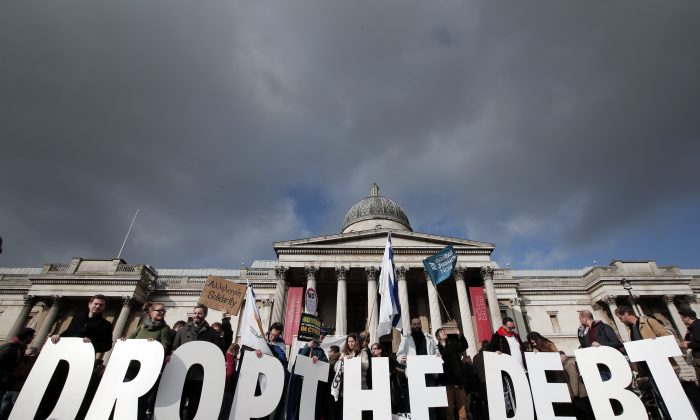 Protesters hold placards during a rally to show solidarity with Greece in central London, on Feb. 15, 2015. Hundreds of protesters gathered in support of the new government and the anti-austerity movement in Greece. (Lefteris Pitarakis/AP)
Opinion

As the world waits to see the outcome of negotiations between the Greek government and its creditors, our attention has been drawn to the fragility of money by the ATM queues in Greece. The euro project, which has long been under strain, may soon start to irrevocably crack.

This fragility is born of an irredeemable tension at the heart of the modern monetary system, between the apparent mobility of money—most types of money nowadays usually flow fairly easily across boundaries and borders of all sorts—and its potential immobility. In Greece, it is the ATM queues for the now ever more tightly rationed amounts of cash that symbolize this. When the mundane technology that so many of us rely on to smooth our passage through life suddenly becomes unreliable or inaccessible, we confront the very real consequences of what can happen when money stops moving.

The fragility of money is born of an irredeemable tension at the heart of the modern monetary system.

If contemporary economies depend on the unceasing movement of money, then the particular problem for Greek citizens is that the money that they depend on doesn’t match their own mobility. This was symbolized by a set of incidents that took place in the aftermath of the imposition of limits of cash withdrawals by the Greek government. Certain enterprising Greeks, taking full advantage of the EU’s freedom of movement laws, crossed into Bulgaria, the nearest EU neighbor, to try to see whether its ATMs would be more generous in giving out cash than their own.

They weren’t. Restrictions on cash advances to Greeks are determined not by the location of the dispensing machine but by the location of their account. But you can see why they were tempted to try. At the heart of the euro is an ideal of unfettered physical movement (although of course only for privileged EU citizens, as the rising death toll of migrants trying to reach Europe continues to grimly remind us) aided and accelerated by equally unfettered monetary movement. The Greek visitors to Bulgaria reasonably enough put this to the test, only to be confronted by the reality that—for them—the euro is simply not mobile enough.

The problems many Greeks are experiencing are made worse by some of their fellow citizens. In the past months, huge sums have left the country as its richer residents have tried to safeguard their wealth. This has in turn contributed significantly to weakening Greece’s banking sector. In at least partial response, the government is said to be considering a tax amnesty for the billions worth of euros that have been tucked away in Switzerland. In such instances, it is the ability for money to not just move somewhere else but to then sit there that comes to matter.

An Obligation to Forgive

Of course, when it comes to the current Greek debt crisis, the real problem the Greeks and their government are facing is not the challenge of how money moves or doesn’t across space but across time. The challenge for the Syriza negotiators is to convince their creditors that the past promises made by Greek governments cannot and should not cause ongoing harm to the lives of the Greek population. This means that at least some of their debts should be written off.

It is a property of debt that it can draw people and governments into making promises that, in the end, prove utterly incapable of being kept.

I study the consumer credit industry and this fact is wholly uncontroversial within it. While creditors may not like debtors breaking their promises, they recognize that they do, build this into their risk models, and, most importantly, they then tolerate debts being written down when they have to be.

It is a property of debt that it can draw people and governments into making promises that, in the end, prove utterly incapable of being kept.

In the case of most contemporary forms of consumer debt, it is also simply not true to say that the only obligation is on the debtor to repay. Societies have gradually developed a range of mechanisms that, even if unsatisfactory, place an obligation on creditors to, in certain circumstances, allow debtors’ promises to be broken. With mechanisms like bankruptcy, linked to the possibility of an eventual clean slate for debtors, we have come to recognize that a debtor’s past cannot in every case be allowed to dominate their future.

Amid the Troika of Greece’s creditors, only the International Monetary Fund (IMF) has, extremely belatedly, shown even a vague sense of recognizing this, in suggesting that a debt write down will be necessary for Greece to recover. The open secret they grudgingly admit is that, because of their deep dependence on flows of debt, modern money requires such mechanisms of forgiveness. Yet it is quite transparent that the majority of Greece’s creditors live in abject fear of this open secret being uttered too loudly within earshot of the more indebted eurozone members. The money they protect depends on it.

The problem for the EU is that, unlike in the case of consumer credit, no real mechanisms have been put in place to allow debt forgiveness to occur. In their stead is the false choice offered to the Greek people of yet deeper austerity or the national immiseration of being forced to leave the euro. Unless creditors quickly work out how to allow debt promises to be broken, then, with or without Greece, the euro will remain fatally fragile.

Joe Deville is a lecturer in mobile work at Lancaster University in the U.K. This article was previously published on TheConversation.com