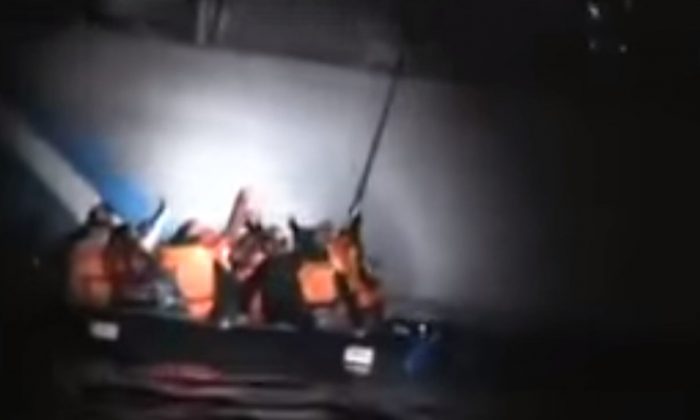 A Greek coast guard ship allegedly tried to sink a raft carrying Syrian refugees and was captured on video, which Greek officials have denied.

The Greek government categorically denied the allegations from Turkey that it deliberately tried to sink the vessel, which was crossing the Aegean Sea and reportedly had 58 refugees on board.

A video of the alleged incident was shot by the Turkish coast guard and appears to show a Greek coast guard official attempting to strike a raft with a long pole or lance as the raft came alongside the vessel.

Later in the video, the refugees are seen in the partially sunken raft waving at the Turkish coast guard, waiting to be rescued.

Both the Greek and Turkish coast guard were assisting each other in attempting to rescue the raft, according to the statement.

“Moreover, we obviously deny any effort by members of the crew to draw near to their large vessel a small inflatable craft by using a nautical hook (that is, a tool used in accordance with international shipping technique and practices for this purpose) while a nearby Turkish coast guard vessel assisted the rescue operation by lighting and facilitating all of the actions with a spotlight,” the statement added.

The Greek officials said that the coast guard would not employ practices, such as trying to sink a refugee ship, “which are incompatible with the values of our culture and which are condemnable at a time when the Hellenic Coast Guard, from early 2015 until today, has saved some 90,000 refugees from the sea in Search and Rescue operations.”

But the accusations against the Greek coast guard were reiterated by a Turkish official.

“We would be very pleased if you order your team to refrain from such acts,” Turkish Coast Guard Cmdr. Rear Adm. Ustem told his Greek counterpart, according to Turkish newspaper Hurriyet Daily News.

According to Ustem, numerous migrants had claimed their dinghies were sunk by Greek military vessels.

“But this is shocking,” the official told Middle East Eye. “We expect that this footage will be investigated—it’s difficult for us to understand why they would try to sink a refugee boat.”