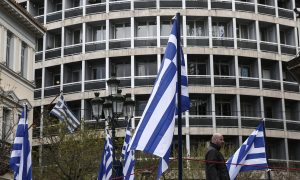 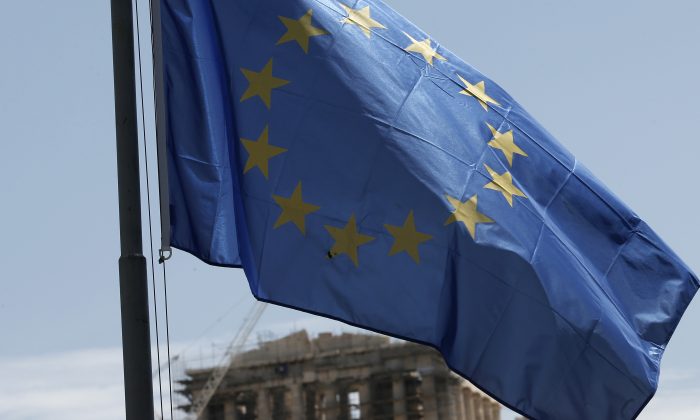 A European Union flag billows in the wind as the ruins of the fifth century BC, Parthenon temple is seen in the background on the Acropolis hill, in Athens, on Wednesday, June 3, 2015. (AP Photo/Petros Giannakouris)
Europe

LONDON—Global stock markets were weighed down Friday by ongoing uncertainty over the future of Greece’s bailout after the International Monetary Fund decided to walk away from discussions in Brussels, citing a distinct lack of progress.

In Europe, Britain’s FTSE 100 dropped 0.7 percent to 6,802, while Germany’s DAX fell 1 percent to 11,215. The CAC-40 in France was 1.2 percent lower at 4,914. Unsurprisingly Greek shares were the worst-performing in Europe, with the main Athens index down 3 percent. U.S. stocks were poised for modest declines at the bell with Dow futures and the broader S&P 500 futures down 0.3 percent.

Friday’s declines follow the IMF’s move to pull its negotiators out of the talks in Brussels and send them back to Washington D.C., saying there had been no progress and that major differences remained in key issues. The move contrasted with recent optimism expressed by the Greek side that some sort of deal will be cobbled together by the end of the month.

Greece’s 240 billion-euro ($270 billion) bailout expires June 30, at which point the country will lose access to the rescue loans it desperately needs to repay debts and avoid a default that could force it out of the euro.

It looks increasingly like next week’s meeting of eurozone finance ministers in Luxembourg could prove decisive in sealing Greece’s financial fate.

The euro was a big loser from the Greek uncertainty trading 0.5 percent lower at $1.188.

Developments surrounding Greece have overwhelmed the impact of some brighter U.S. economic data of late. Figures Thursday showed retail sales rising by a greater-than-anticipated 1.2 percent in May.

Benchmark U.S. crude was down 53 cents to $60.24 per barrel in electronic trading on the New York Mercantile Exchange. Brent crude, a benchmark for international oils, fell 31 cents to $65.48.