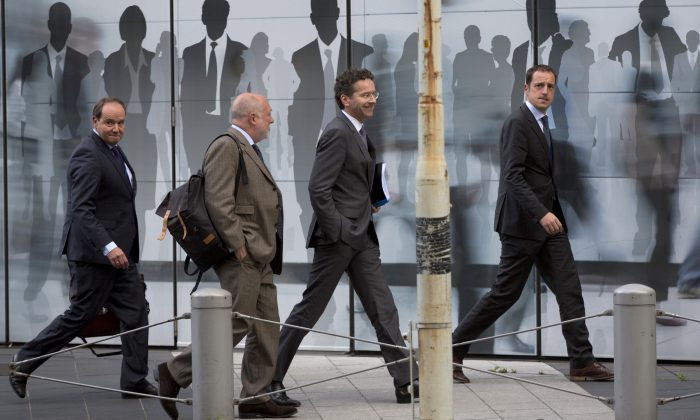 Greece at Loggerheads With Creditors Over Reforms for Cash

ATHENS, Greece— Greece remains at loggerheads with its creditors over key economic reforms after a meeting between Prime Minister Alexis Tsipras and the head of the European Union’s executive arm failed to yield a breakthrough on the release of vital bailout loans.

And with senior members of Greece’s governing radical left Syriza party stressing that they cannot accept a package of measures proposed by the country’s creditors, markets across Europe sank Thursday. With time running out, there are real fears that Athens won’t secure a deal that will see it get remaining bailout funds to avoid going bankrupt.

The Athens stock exchange was trading about 2 percent lower in mid-day trading, while the Stoxx 50 of leading European shares was down 1.5 percent.

There had been high hopes that Tsipras’ meeting with Commission President Jean-Claude Juncker, which ran into the early hours of Thursday, would at the least begin to show the outlines of a deal that would release the 7.2 billion euros ($8.2 billion) remaining in Greece’s remaining bailout fund.

Though progress appears to have been made on the level of the budget surplus that Athens has to run in the years ahead, the two sides remain far apart on issues such as sales taxes and pensions.

“If the government accepted this proposal, it would have been a disorderly retreat and an agreement to our submission,” Social Security Minister Dimitris Stratoulis told Parliament.

“The entire package of proposals that were submitted yesterday are rejectable by our government,” he said, describing them as an attempt by bailout lenders to impose “neo-colonialism.”

Time is pressing, as the European part of Greece’s bailout officially runs out at the end of the month and the country faces about 1.6 billion euros in repayments to the International Monetary Fund in June. The first installment, a relatively low amount of just over 300 million euros, is due Friday.

While there had been doubts Greece would be able to pay due to a liquidity crunch, Tsipras indicated there would be no problem, telling reporters in Brussels “don’t worry about it.” Other installments are due on June 12, 16 and 19.

Speaking after the meeting, Tsipras said the talks had been “friendly and constructive,” but dismissed outright some of the proposals by the institutions overseeing Greece’s bailout — the European Central Bank, Commission and IMF.

“The conclusion of this discussion is that the proposal the Greek side has submitted remains the only realistic and constructive proposal on the table,” he said.

Although there was some common ground, including on Greece having to post lower primary surpluses — the budget without taking debt servicing into account — Tsipras insisted cuts to supplementary payments to low-income pensioners or increasing value added tax on power bills were out of the question.

In Athens, Syriza party officials went further, with several expressing outrage at what they described as attempts to blackmail Greece.

“A proposal that describes measures of extreme austerity … shows no respect for the mandate of the Greek people,” Syriza party secretary Tassos Koronakis told Greece’s Star television. “It is a neoliberal shock tactic … that cannot form the basis of an agreement.”

Discussions are set to continue in coming days.