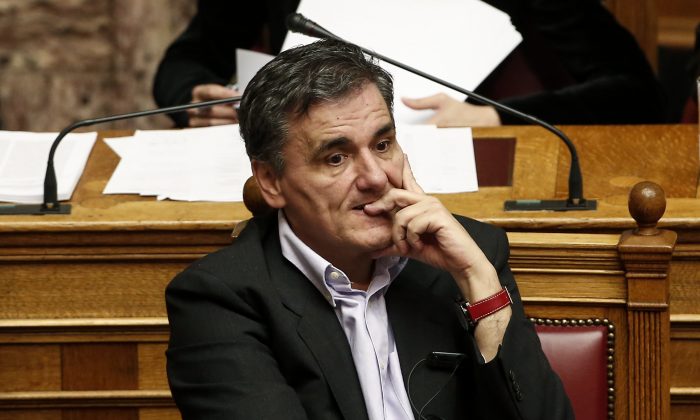 Greece's Finance Minister Euclid Tsakalotos attends a parliamentary session ahead of a vote, in Athens, on Tuesday, Dec. 15, 2015. Lawmakers in Greece are set to sanction the right to sell bad business loans from local banks to overseas funds as part of a new austerity bill demanded by bailout lenders from the rest of the eurozone. (AP Photo/Yorgos Karahalis)
Europe

ATHENS, Greece—Greek lawmakers on Tuesday approved legislation granting the right to sell bad business loans from local banks to overseas funds as part of a new austerity bill demanded by bailout lenders from the rest of the eurozone.

All 153 members of Prime Minister Alexis Tsipras’ left-led coalition voted in favor of the draft legislation, while all 138 opposition lawmakers present rejected it, and nine were absent from the vote.

The changes will only affect larger businesses and follow months of pressure from lenders as the number of non-performing loans in the Greek market rose above 40 percent.

The legislation was set as a condition for the release of the next loan installment of 1 billion euros ($1.1 billion).

Other provisions in the bill include a new pay scale for civil servants, while plans to partially privatize the national power grid operator, ADMIE, were delayed until next year.

Tsipras’ coalition, which suffered the defection of two lawmakers in a previous vote on creditor-demanded reforms, still faces a major hurdle next month, when the government has pledged to legislate unpopular pension reforms and hikes in taxation for farmers.

Greece has depended on international rescue loans since it nearly went bankrupt in 2010. Tsipras first came to power in January, pledging to reverse resented austerity measures creditors sought in return for the loans, but he was forced a few months later to sign yet another bailout with further tough cutbacks. Nevertheless, he won a second four-year term in early elections held in September.