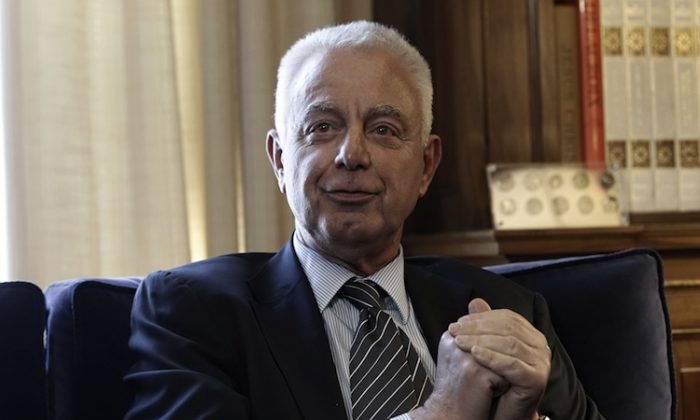 Panagiotis Pikrammenos, a senior judge, is named caretaker Prime Minister on May 16, to lead Greece until fresh election on July 17. (John Kolesidis/AFP/GettyImages)
Europe

Greece Appoints Non-Politicians to Govern For a Month

Greece swore in its caretaker government on Thursday tasked with keeping the country from further chaos until new elections are held on June 17.

The cabinet will be led by the chief judge of the supreme administrative court, Panagiotis Pikrammenos, with mainly academics, diplomats, security specialists, and some ex-ministers filling the rest of posts.

“This is purely a caretaker government. However, it escapes no one that our country is going through difficult times,” interim Prime Minister Pikrammenos was quoted as saying by Athens News.

New elections were ordered last week after several attempts by President Karolos Papoulias failed to produce a unity government in the wake of the divisive May 6 vote that sent seven parties to Parliament.

The top three parties, which included the two mainstream, pro-austerity parties in first and third place, and the leftist, anti-austerity Syriza party in second, were unable to find common ground or find enough support from the other four parties to form a government. Nor were the smaller parties able to come together.

The main issue polarizing voters and politicians is the severe austerity measures Greece accepted in order to secure the most recent $170 billion bailout loan from the European Union and International Monetary Fund. If Greece backpedals on its obligations, it would default on its loans and be forced to exit the eurozone.

In the face of such a prospect, Greek citizens have withdrawn hundreds of millions of euros from Greek banks in recent days.

According to a poll conducted earlier this week, radical left Syriza is poised to win the fresh round of elections, while the country’s traditional two ruling parties—center-left PASOK and the center-right New Democracy—will suffer even greater losses than the trouncing they received on May 6, Athens News reported.

Syriza leader Alexis Tsipras has received a large amount of international attention in recent days, giving an interview with CNN on Wednesday.

If Greece were to impose austerity measures on itself, it will go “directly to the hell. And we want to change this way,” he said in the interview.

Tsipras also said that he wants Greece to keep using the euro, responding to an ultimatum given by German Chancellor Angela Merkel that Greece needs to reform itself and impose austerity cuts or be forced out of the eurozone.

“We don’t want outside the eurozone. But we believe that Madame Merkel put the euro and the eurozone in big danger by keeping these austerity measures,” Tsipras said.