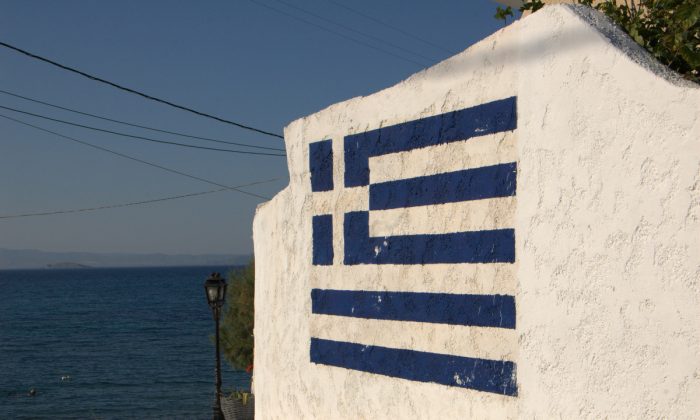 Hitting the wall. Greece’s future is still in the balance. The Greek flag in a wall in Attica, Greece, on June 25, 2008. (Erik Eskedal/CC BY 2.0/Flickr)
Opinion

Greece has just experienced a nasty reality check. For Europe, the reckoning might simply lie a little further down the road. The Syriza party and prime minister Alexis Tsipras secured a triumph in the elections of January 2015 based on promises to “tear up” the bailout agreements and put an end to austerity. Until a week ago, when the notorious referendum took place on July 5, the party and its leader seemed to stick by their conviction that an aggressive stance toward EU partners should and could broker a better deal for Greece, away from halfhearted compromises. On the morning of July 13, it became obvious that this was not possible.

The Greek government had to sign an agreement not too different from those to which previous governments agreed and which were opposed by Syriza—in fact, some of the measures the Greek parliament is being asked to pass were part of previous agreements but were never implemented. Was Syriza naive? Were they populists? Probably a combination of the two.

Despite the deal, a Greek exit from the euro is closer than ever.

Grexit Not Dead Yet

At least for now, Tsipras seems like a leader who found the courage to assume responsibility and came to realize—the hard way—that the EU is all about compromise. Tsipras has now two choices: either follow the steps of previous Greek governments, equivocate and eventually fail taking the country with him, or truly support the plan and try making a positive change out of a very difficult deal. Despite the deal, a Greek exit from the euro is closer than ever, particularly if he chooses the former.

Something that could help Tsipras choose the latter is that his government is the first to enjoy very wide political support, at least for the moment. Because of the high stakes and high tension of the last few weeks, all political parties with a clear European orientation have backed Tsipras in the negotiations and seem to support the agreement. This is a weapon that no other government had before in promoting reforms. A Syriza-led government is also the best option for stability in Greece, given the popularity that Syriza and Tsipras enjoy, something that should be respected.

But this does not mean that Tsipras would not face opposition or that anti-austerity or populism in Greece has ended. In fact, quite the opposite is true.

At least for now, Tsipras seems like a leader who found the courage to assume responsibility and came to realize—the hard way—that the EU is all about compromise.

A sizable proportion of Syriza MPs, including some of the party’s ministers, has made clear that it does not support the agreement. The next few days will show whether this group will take control over the anti-austerity camp. At the same time, others, like members of the government coalition partner Independent Greeks or even far-right party Golden Dawn, remain opposed to the agreement. What happened this weekend would probably only fuel their euroscepticism.

But the way this deal was struck could have implications far beyond Greece. The nature of discussions between eurozone elites uncovered once more the huge distance between European citizens and what goes on in Brussels. While discussions among the finance ministers of the Eurogroup and at the Euro Summit were taking place, social media was filled with frustration over the apparently rather aggressive form of negotiations. International media agencies, meanwhile, were keen to underline the lack of solidarity shown by eurozone countries, especially Germany.

European leaders seem oblivious to that and the impact that this whole process could have had on euroscepticism across Europe. The leader of Britain’s anti-EU UK Independence Party, Nigel Farage, was quick to comment that if he were a Greek politician he would vote against this deal, and if he were a Greek who voted “No” in the referendum he would be protesting in the streets. Just a year after the European elections in 2014, there is a risk of a new wave of euroscepticism which the EU will have to address in the long term.

Europe will be forged in crises, and will be the sum of the solutions adopted for those crises.
— Jean Monnet, French political economist

Jean Monnet, the French political economist, said in 1976, “Europe will be forged in crises, and will be the sum of the solutions adopted for those crises.”

Indeed, the EU is the child of World War II and, after that, has evolved through many other crises. One could imagine a similar social media frenzy had the means existed during the failed European constitution of 2005 or even the so-called “empty chair” crisis of the mid-1960s when France withdrew its representatives from the European Commission.

Let’s hope this crisis improves the EU and allows it to progress; however much this latest crisis has been an important one for the public debate, it is by no means the first—and it probably contains the seeds of the next.

George Kyris is lecturer in international and European politics at the University of Birmingham in the U.K. This article was previously published on TheConversation.com