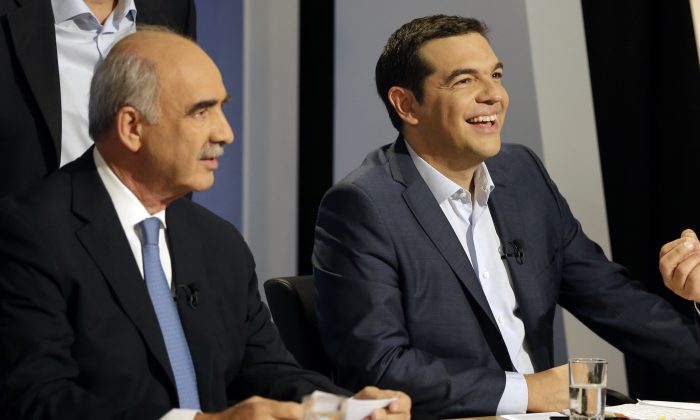 ATHENS, Greece—Opinion polls published on the final day of campaigning in Greece’s general election suggest the left-wing Syriza party and conservative New Democracy are in a dead heat before the Sunday ballot.

Three surveys published Friday show the two parties roughly level within the margin of error, with the winner likely to require the support of two smaller parties to form a coalition government.

Syriza leader Alexis Tsipras resigned as prime minister and called the snap election last month after reaching an agreement with eurozone creditors for a third bailout that triggered a split within his party.

Syriza has maintained a narrow lead in most polls, and has ruled out forming a grand coalition with the conservatives — despite a commitment from both parties to implement the new 86 billion euro ($97 billion) bailout agreement.

Under Greece’s electoral system, the top party receives a 50-seat bonus in the 300-member parliament. The leading three parties each have three days to try to form a coalition, in successive rounds of consultations, if the election produces a hung parliament.

Softening earlier objections, Tsipras indicated that he could work with the socialist Pasok party and centrist Potami parties as possible partners.

“Our aim is to get a governing majority. But even if we don’t get that majority we will have a government in first round of consultations,” he told Antenna television Friday.

“What I’m saying is that a government will be formed. It can either be a conservative government or a progressive one.”

Tsipras will speak at his final campaign rally in Athens’ main Syntagma Square later Friday, an event due to be attended by Pablo Iglesias, leader of the Spanish leftwing party Podemos.