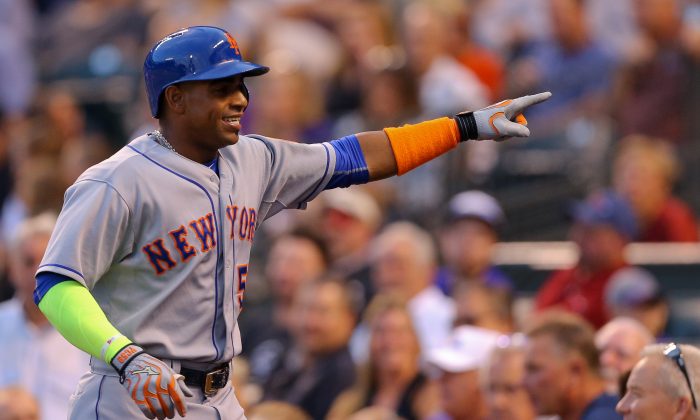 To say that Yoenis Céspedes has been a good acquisition by the Mets is an understatement. Acquired from the Tigers just hours before the July 31 trade deadline, the slugging outfielder is hitting .310/.355/.684 (average/on-base/slugging) in his 39 games with New York (through Saturday) with 16 home runs, 41 RBIs, and 35 runs scored.

More importantly the Mets are 28–11 since and have completely distanced themselves from the Washington Nationals in the NL East.

Is it all the doing of Céspedes? Not quite, but he’s a big reason why. Meanwhile, he’s quickly becoming one of the best ever trade deadline acquisitions in MLB since the addition of the wild card in 1995. Here are the best:

Johnson pitched 22 years in the major leagues and won five Cy Young awards, led the league in strikeouts nine times, and was co-MVP of the 2001 World Series, yet his half-season as an Astro in 1998 might have been his most impressive performance of all. Dealt on July 31, Johnson got in 11 starts for Houston and won 10 of them, while compiling a microscopic 1.28 ERA and throwing four complete game shutouts, in helping the Astros to the postseason. Despite a 1.93 ERA in the playoffs though, Johnson lost both of his starts to San Diego.

The already-out-of-contention Royals, looking to maximize their return for Beltrán, dealt the five-tool outfielder well before the trade deadline—June 24. Given that they received Mike Wood, John Buck, and Mark Teahan for Beltrán, the plan obviously failed, but for Houston it was a great three-month rental. In 90 games with the Astros, Beltrán put up a batting line of .258/.368/.559 with 23 home runs and 53 RBIs—not bad. But in the postseason—his first ever—Beltrán came alive, hitting eight home runs and driving in 14 runs and stealing 6 bases in just 12 games, while posting an insane batting line of .435/.536/1.022.

Ramírez, reportedly unhappy with his contract in Boston, got a fresh start with the Dodgers, just before the trade deadline (July 31) and made the most of it. The mercurial right-handed slugger had an unworldly batting line of .396/.489/.743 with 17 home runs and 53 RBIs in in 53 games with LA. He continued his run in the postseason with four home runs and 10 RBIs in eight games as the Dodgers made it to the NLCS. For his one-third season efforts, Ramírez actually placed fourth in the NL MVP voting.

Beltrán’s Best Yet to Come for Yankees

Sabathia was fresh off his 2007 Cy Young season with the Indians when the Brewers found it necessary to upgrade their rotation for a possible playoff run that year. Acquired on July 7, Sabathia made the most of his 17 starts, going 11–2 with a 1.65 ERA while throwing seven complete games—three of them shutouts. Even more amazing, his final three starts were all made on three days’ rest—including a complete game, 122-pitch gem against the Cubs that clinched the wild card for Milwaukee on the final day of the season. For his half season in the National League, Sabathia finished fifth in the Cy Young voting and sixth in the MVP race.

Teixeira, who had been traded for a king’s ransom to Atlanta on July 31 the previous summer, was dealt to the Angels almost a year to the date later (July 29). While the Braves were unable to advance to the postseason with Teixeira on the roster the year before, the Angels ended up with 100 wins and Teixeira and his 13 home runs, 43 RBIs, and batting line of .358/.449/.632 was a big reason why. Although the Angels lost to Boston in the postseason, Teixeira hit .467/.550/.467 in the four-game series.

Despite winning the Cy Young in 2008 with Cleveland, Lee wasn’t exactly a household name when he was dealt to the Phillies on July 29 of the following season. He posted a nondescript 7–4 record with a 3.39 ERA in 12 regular season starts for Philadelphia. But the postseason was another story. In five playoff starts that fall, Lee made a name for himself, going 4–0 in five starts with a 1.56 ERA. Included were a pair of World Series wins—the only two games the Phillies won in the Fall Classic—against the mighty New York Yankees.