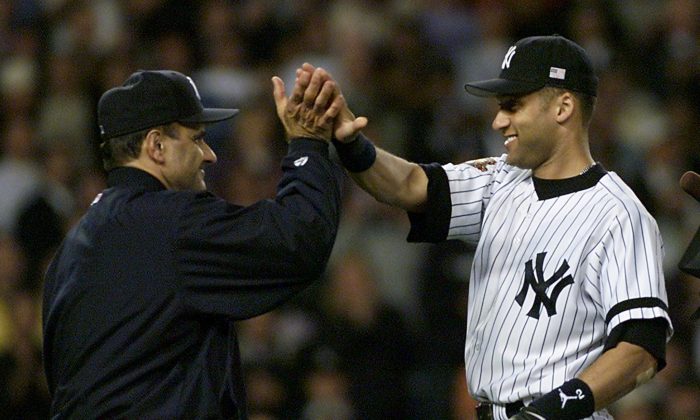 Derek Jeter's (R) play in the 2001 ALDS turned around the series for the Yankees and manager Joe Torre (R.) (Timothy A. Clary/AFP/Getty Images)
Baseball

Rare is the moment that is replayed for ages. But now that we’re in the playoffs, the chance to make history is here. Here are the best greatest moments in division series history, which started in 1995.

Though no-hitters have certainly been thrown in the regular season no pitcher had pitched a no-no in the postseason since Don Larsen’s perfect game in 1956. That is until Roy Halladay came along.

Halladay blanked the Reds in the opener of the 2010 NLDS while allowing just one walk and striking out eight as the Phillies won 4–0. Philadelphia would eventually sweep the Reds in three.

Thought to be nearly washed-up at age 40, the Yankees signed Raul Ibanez with plans of platooning him and using him as a pinch-hitter. Little did they know he’d be their best hitter against Baltimore in the 2012 ALDS.

With the series tied at one and the Yankees down 2–1 in the bottom of the ninth, Joe Girardi made a gutsy call to lift struggling three-time MVP Alex Rodriguez in favor of Ibanez. Ibanez rewarded him by crushing Jim Johnson’s 1–0 offering over the wall to tie the game at two and send the fans at Yankee Stadium into a frenzy.

But there was more.

With the game still tied at two, Ibanez came up again to lead off the 12th and hammered the first pitch he saw for a walkoff home run. The win helped propel the Yankees into the ALCS.

Outside of Game 1’s 3–2 finish, the Red Sox/Indians 1999 ALDS was a slugfest of sorts. Boston forced the Game 5 with a 23–7 blowout win in Game 4 and Game 5 was already tied at 8 runs a piece in the fourth inning, when Boston manager Jimy Williams decided he had enough and summoned Cy Young winner Pedro Martinez into the game to shut down Cleveland’s potent offense.

Martinez was at his absolute apex in 1999, going 23–4 in the regular season with a microscopic ERA of 2.07 but had to leave Game 1 early with back stiffness. Making his first appearance since that time it was unknown how he’d respond. Pedro erased all doubts with his performance by no-hitting one of the all-time great lineups over the final six innings as Boston won the clincher, in Cleveland, 12–8.

The year after the strike canceled the World Series, MLB needed a thrilling playoffs and they got it with the New York/Seattle series.

The Yankees, playing in their first postseason in 14 years (imagine that) took the first two games of the best-of-five series in New York before heading to Seattle for the remainder.

The Mariners, with such stars as Ken Griffey Jr., Randy Johnson, and a 20-year-old Alex Rodriguez took the next two games to force a decisive Game 5.

The finale saw the Yankees clinging to a 4–2 lead heading into the eighth before Seattle rallied for a pair of runs off starter David Cone. Mariano Rivera actually relieved Cone with the bases loaded but struck out Mike Blowers to end the threat with the game tied at four.

After a scoreless 9th and 10th frames, Randy Velarde singled in Pat Kelly (off of Randy Johnson) in the top of the 11th to take the lead. But Seattle wasn’t done.

Singles by Alex Cora and Ken Griffey Jr. led off the inning, against Jack McDowell, bringing up Edgar Martinez. Martinez coolly doubled down the left field line, easily scoring Cora, and Griffey, running from first, came all the way around and slid into home plate ahead of the throw to win the game and series in dramatic fashion.

There’s virtually no play to compare this to because it had never been done before and hasn’t been replicated since. But Derek Jeter’s flip to home plate of Shane Spencer’s offline throw, which missed both cutoff men, changed the momentum of the 2001 ALDS.

The then three-time defending champion Yankees were in serious trouble, down 2–0 in the series and clinging to a slim 1–0 seventh-inning lead on the road in Oakland when Terrence Long hit a liner down the first base line.

Jeremy Giambi, who had reached via a single was off with the crack of the bat from first and when Spencer’s throw missed both cutoff men, and was bouncing and angling away from hitting catcher Jorge Posada, it looked like Oakland was going to tie it. But out of nowhere Jeter darted into the picture and in one motion caught and flipped the ball to Posada, who applied the tag, just in time, to a non-sliding Giambi for the third out.