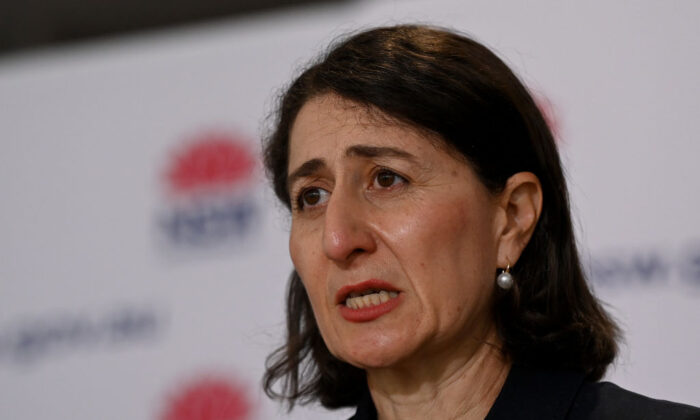 Greater Sydney to Get ‘Freedoms’ Once 70 Percent of State Vaccinated

'You Have Been Warned': State Leader Pushes for More Vaccinations
By Daniel Y. Teng

The New South Wales (NSW) government in Australia has announced that fully vaccinated residents of Sydney, and its surrounding regions, will start getting their freedoms back once 70 percent of the state’s population is vaccinated—which is earmarked to be in October.

NSW State Premier Gladys Berejiklian announced the roadmap that would see the state’s progression out of lockdown, which has been ongoing since late June to contain an outbreak of the Delta variant of the CCP (Chinese Communist Party) virus, commonly known as the novel coronavirus.

“We’ve also had input from our health experts and stakeholders to make sure that when we start reopening, it’s at 70 percent double dose—that it’s done in a safe way,” the premier told reporters on Sept. 9, noting that the “freedoms” would be granted on the first Monday after the target was reached.

“And it’s only for people who are vaccinated. So, you have been warned, if you’re not vaccinated, come forward and get the vaccine, otherwise, you won’t be able to participate in the many freedoms that people have at 70 percent vaccination,” she added.

The premier said once 80 percent of the population was vaccinated, more freedoms would be available around major events, international travel, and community sport.

The freedoms available once the 70 percent benchmark is reached include the opening of retail stores, hair salons, and gyms, however, they will only be accessible to those who have received two doses of the vaccine.

“We’re going to have to work on a number of those things and redesign what our test trace and isolate policies are into the future,” she said.

Prime Minister Scott Morrison welcomed the NSW roadmap saying it follows closely with the plan agreed to by the National Cabinet.

“This plan supports the initiatives that are there being driven by the safe process of opening underwritten by the Doherty modelling and supported by the national plan.”

In late July, the National Cabinet—an intergovernmental body involving the prime minister and state and territory leaders—agreed on a four-stage vaccination roadmap based on modelling from the Doherty Institute.

Federal and state governments are pinning their hopes on improving vaccination rates to control the outbreak and move away from relying on harsh lockdown measures and restrictions.

The country is currently in Phase A of the plan, to speed up vaccination rates.

Once 70 percent of the country’s population is vaccinated Phase B is triggered, which is meant to see stay-at-home orders and restrictions largely removed around the country.

At 80 percent, international travel will return.

The latest announcement from the NSW government comes after public discontent at prolonged lockdowns began spilling over, with an increase in protest activity and petitions against government-mandated restrictions, and vaccine mandates or passports.

The NSW roadmap includes the following:

GATHERINGS IN THE HOME AND PUBLIC SPACES

WEDDINGS, FUNERALS AND PLACES OF WORSHIP