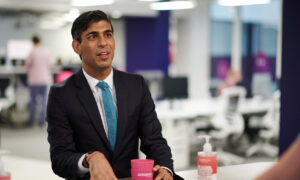 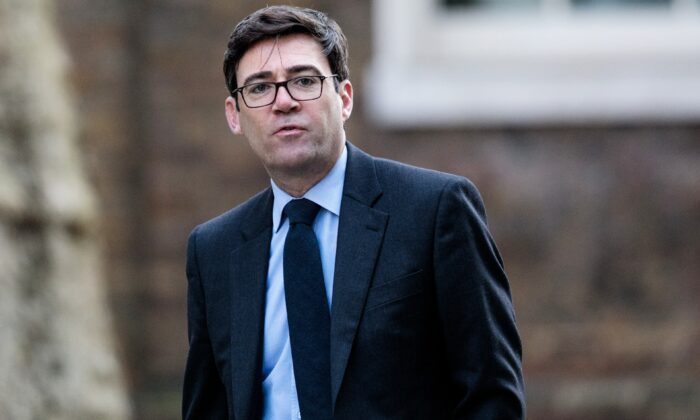 The mayor of Greater Manchester on Thursday said local leaders “have unanimously opposed the government’s plans for Tier 3,” which requires closure of pubs and bars, unless the government provides “proper compensation” for affected workers and businesses.

“We will not accept level 3 in its current form,” Andy Burnham told the Telegraph. “It would have to be by imposition, not through consent” that Greater Manchester goes in to tier 3 lockdown.

The Labour mayor said leaders will “respect the law of the land,” but would consider legal routes to fight the restrictions.

“They are asking us to gamble our residents’ jobs, homes, and businesses, and a large chunk of our economy on a strategy that their own experts tell them might not work,” the mayor said in a statement.

Burnham said the deputy chief medical officer (DCMO) told Greater Manchester leaders that the regional lockdown strategy “would not be certain to work” even if it involves “widespread closures way beyond pubs” and “done in tandem with other neighbouring regions.”

The only thing that the DCMO considers would work, the mayor said, is a national lockdown.

Prime Minister Boris Johnson has so far resisted pressure calling for a national lockdown, citing damage to the economy and different infection rates across different regions.

Greater Manchester and other Northern English regions were already under some local restrictions before the tiered system was announced because of their upward trending infection rate.

A decision on whether Greater Manchester should mover to Tier 3 has not yet been made. In nearby Liverpool, which is already in Tier 3, gyms, leisure centres, betting shops, and casinos have also been forced to close in addition to pubs and bars not serving meals.

Burnham said the local leaders concluded that the Northern English region is being sacrificed to save jobs and businesses elsewhere.

The only way they would agree to the lockdown, Burnham said, is that the government provides 80 percent furlough for affected employees and self-employed workers instead of the 67 percent currently on offer, and a “proper compensation scheme for businesses.”

Burnham had repeatedly argued the current support package is “unacceptable.”

Sacha Lord, Night Time Economy Adviser for Greater Manchester, has been heading a group of brewers and pubs to seek a judicial review of the government’s basis for the pub closure order.

“What they’re doing now is they’re forcing mass closures, mass redundancies … whatever support packages mentioned today, I can tell you now I know operators who are going to hand back their keys at the end of this month,” Lord told the BBC on Monday.

“This is not just about finance, the mental pressure that they’ve been put under since March is phenomenal, and people are at their breaking points, you know, this is playing with people’s lives.”

After England went into national lockdown in March, Finance Minister Rishi Sunak shelled out billions to pay 80 percent of the wages or average income of “non-essential” employees and self-employed workers.

As the furlough scheme winds down at the end of October, Sunak announced on Oct. 9 another six-month scheme, paying up to two-thirds of each employee’s salary, with a cap of £2,100 ($2,724.33) a month, if they work for companies that are forced to close temporarily.