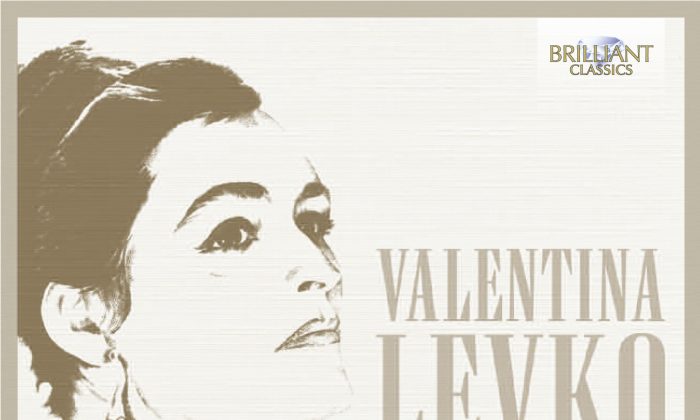 The cover of the CD set, “Valentina Levko: Star of the Bolshoi.” (Courtesy of Brilliant Classics)
Entertainment

I hesitated before agreeing to review an 11-CD set of Valentina Levko (born in 1926) since I had never heard of the opera singer. I looked her up in several reference books on classical music and her name is not even listed.

The Russian contralto, who performed during the Cold War, rarely toured outside of her country and consequently was nearly unknown in the West. What caught my eye, though, was a quote on the press materials from Sol Hurok, the famous impresario: “In a career of 50 years, I have rarely encountered such a voice, rounded, youthful, with an uncommon timbre and astonishing warmth” and he said that he listened to one of her recordings every night.

The set, “Valentina Levko: Star of the Bolshoi” (on Brilliant Classics) confirms Hurok’s good taste. The collection is simply stunning. Each CD presents a different type of music and displays the remarkable versatility of the singer.

From Levko’s first notes, it becomes clear that this singer had a distinctive voice and an acute dramatic sense. She could open her voice up for operatic statements or tone it down for intimate art songs. The collection is like a classic Russian novel, hard to put down.

Much of the set concentrates on Russian music: operas, folk songs, art songs, including Tchaikovsky and Rachmaninov, as well as 20th century Russian songs.

However, Levko’s artistry transcended her country’s borders. There are CDs of songs by classical composers of other countries, a wide range of opera arias from Italy, Germany, and France and folk songs from around the world.

Levko’s singing is perhaps at its most beautiful on an album of baroque arias, a true rarity from an era when the music of Bach and Handel was rarely performed in the former Soviet Union. On the set, she performs with leading conductors of the era, including Mark Ermler, Kirill Kondrashin and Kurt Masur and sings a duet with the great tenor Ivan Koslovsky. (How about a collection of his recordings?)

The Brilliant Classics set, as usual, is a no-frills collection. A cardboard box with a booklet contains a bio of the singer and a brief description of each CD, but no translation. In sum, it’s extraordinary music at a low price.

By contrast, Mirella Freni (born in Modena, Italy in 1935) became an international star when she was young. She started as a lyric soprano and achieved fame as Mimi in “La Boheme,” a performance that was shown around the world on a film of the opera. She later made an acclaimed recording of the opera with Luciano Pavarotti.

Freni was an attractive woman, an accomplished actress, as well as a superb singer and had a phenomenal 50-year career. She appeared at the Metropolitan Opera over a span of 40 years. She moved from the earlier lyric roles into dramatic soprano parts, eventually scoring successes in Tchaikovsky operas. Her last performance was as Joan of Arc in Tchaikovsky’s “The Maid of Orleans” when she was 70 years old.

The newly released 3-CD set, “Mirella Freni: The Opera Album” (on Acanta) is taken from the earlier part of her career—from 1959 and 1973-74. The first CD is all Puccini (she was an ideal Puccini heroine); the second contains highlights from Verdi’s “La Traviata,” and the third contains arias from Verdi, Bellini, Mascagni, Puccini, and Bizet.

Freni’s singing is unfailingly lovely and infused with charm and feeling. The only downside of the set (at least for this listener) is the fact that the tenor on nine of the tracks is Franco Boniselli. Fortunately, these recordings were made earlier in his career when he was at his best.

During Boniselli’s later years, he became known as “The Madman” (an example of his eccentric behavior can be seen on his YouTube performance of “Di quella pira”). Even during his prime, however, he was not in the same class as Pavarotti, Domingo, and Carreras, all of whom recorded with Freni.

Luciano Pavarotti in his glorious prime (1978-1980) can be found on the newly re-released “Giuseppe Verdi Rarities” (on Warner Classics) with Claudio Abbado conducting the La Scala orchestra.

The six arias are from “Ernani,” “Attila,” “I Due Foscari,” “of “Les vêpres siciliennes,” and there are two orchestral pieces from “Simon Boccanegra” and “Aida.”

The reason for the obscurity of the pieces is that Verdi composed alternate arias and revised his scores, depending on the talents of the singers and the tastes of the audiences in the various countries where his operas were performed.

If you already own the Pavarotti’s versions of more popular arias, you might want to seek this one out. The only flaws are the short running time, and Pavarotti’s appearance on only six pieces. On the other hand, his singing just on “Si lo sento, Iddio mi chiama” from “I Due Foscari” with its amazing high notes is worth the price of the CD.