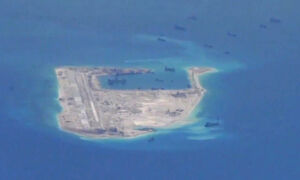 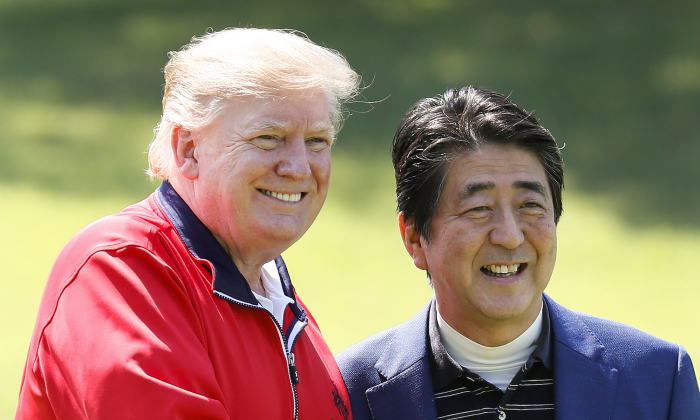 ‘Great Progress’ Made in Trade Negotiations With Japan, Trump Says During State Visit

President Donald Trump on May 26 said that “great progress” has been made in bilateral trade negotiations with Japan, signaling that a new deal with the Asian superpower will favor the United States more than the current arrangement.

Trump and Japanese Prime Minister Shinzo Abe spent the day together on May 26 placing their close personal relationship on display, as tensions flared with mutual adversaries around the world. The pair smiled and chatted as they played golf, attended a sumo wrestling match, and dined at a hibachi restaurant.

According to Trump, the two leaders discussed trade and military matters ahead of a day of formal meetings on May 27. Washington and Tokyo are negotiating a bilateral trade deal. Trump views the existing relationship as tilted in Japan’s favor and has directed U.S. trade negotiators to secure a more fair deal.

“I think we had a very productive day and tomorrow, likewise, will be a very productive day,” Trump said as he sat beside First Lady Melania Trump at the start of the dinner with Abe and his spouse, Akie Abe. The two couples dined at a hibachi restaurant, where dishes are handed to diners on a long paddle.

While a final trade deal is likely to favor the United State more than the current trade arrangement, Trump said official developments on the matter will be held until after Japan’s election in July.

“Great progress being made in our Trade Negotiations with Japan,” Trump wrote on Twitter. “Agriculture and beef heavily in play. Much will wait until after their July elections where I anticipate big numbers!”

Japan lifted all restrictions on the import of U.S. beef just days before Trump’s visit. At a dinner with business leaders in Japan on May 25, Trump thanked Japan for the concession and said more developments are coming soon.

“With this deal, we hope to address the trade imbalance, remove barriers to United States exports, and ensure fairness and reciprocity in our relationship. And we’re getting closer,” the president said.

Outside the bilateral trade deal, the United States and Japan are aligned on a number of foreign policies. Chief among these is an international campaign to pressure the communist regime in North Korea to give up its nuclear weapons and intercontinental ballistic missile program.

Shortly after arriving in Japan, Trump wrote on Twitter that he wasn’t concerned about the recent short-range missile launches by the communist regime in North Korea. Japan said the launches were in violation of a United Nations treaty, as did national security adviser John Bolton. Trump said he believes North Korean leader Kim Jong Un won’t renege on his promises.

Kim oversaw the testing of a new short-range missile earlier this month but is still in compliance with a promise to Trump to not test nuclear weapons and intercontinental ballistic missiles.

Tensions with North Korea are part of a broader pattern of global tensions, as Trump works to put America’s adversaries in check. Washington is engaged in a protracted trade war with China. The United States is also building up a military presence in the Middle East to address unspecified threats from Iran, another regime crippled by U.S. sanctions.

“The relationship with Japan and the United States, I can say for a fact, has never been stronger. It’s never been more powerful,” Trump said, at a meeting with business leaders shortly after arriving in Japan on May 25.

After a round of golf, Trump became the first sitting U.S. president to attend a sumo wrestling match. The president and first lady watched alongside Abe, while a pair of advisers leaned in to explain the specifics of the ancient sport.

Trump presented a U.S.-made trophy to the winner at the end of the match. The President’s Cup is topped with a bald eagle, the national bird of the United States. Trump said he funded the trophy from his personal fortune.

“In honor of your outstanding achievement as Sumo Grand Champion, I hereby award you the United States President’s Cup,” Trump said.

In another first, Trump on May 27 will become the first foreign leader to attend a state banquet with Emperor Naruhito and Empress Masako, the royal leaders in Japan’s new Reiwa era.

“It’s been 200 years since something like this has happened, so it’s a great honor to represent the United States,” Trump said.