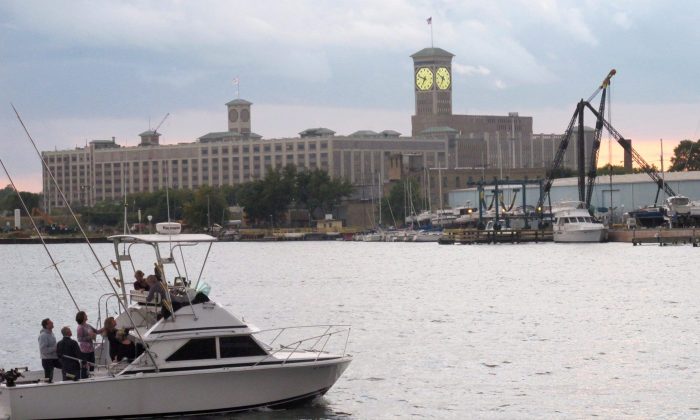 A fishing boat cruises on the Milwaukee River near Lake Michigan, an area designated for cleanup because of decades of toxic pollution, Sept. 12, 2013. Ottawa has announced new funding for four cleanup projects around the St. Clair River in Southwestern Ontario. (AP Photo/John Flesher)
Canada

In the ongoing effort to clean up the Great Lakes, the federal government is committing new funding worth $418,000 to four projects around the St. Clair River in Southwestern Ontario.

The 65-km St. Clair has been listed as one of the Great Lakes Areas of Concern. It was placed on the Remedial Action Plan, a restoration plan, in 1987.

“Fish and wildlife habitat on both sides of the St. Clair River have been considerably altered due to industrialization, urban development, diking, drainage for agricultural purposes, and the development of navigational channels,” notes a Michigan Department of the Environment report on the St. Clair River Areas of Concern in 2008.

“There were 43 areas of concern in the Great Lakes. These are areas that were identified as having experienced high levels of environmental harm. So 12 of those 43 were Canadian, 5 were shared, and the others were in the U.S.,” Colin Carrie, Parliamentary Secretary to the Minister for the Environment, said in an interview.

“Work has been completed on three of the Canadian areas. By 2019 we anticipate being able to complete remedial action for a further five Areas of Concern, but there is more work to be done.”

The Great Lakes Water Agreement penned between the U.S. and Canada in 2012 requires that remedial action plans be developed by each country that identify beneficial use, work with local communities, summarize how the measures have been completed, and undertake ongoing monitoring of restoration progress.

The city of Sarnia, a region the US Environmental Protection Agency has listed as a major source of concern due to its high industrial and agricultural practices, will receive $75,000 of the new funding to improve its wastewater monitoring of flows into the St. Clair.

Another $90,000 will go toward creating 4-10 km of shore buffers around the river and to restore 40 acres of wetland.

“Each group has its individual project that they are working toward,” said Claire Sanders with the Essex Conservation Authority. “There has been a huge amount of work done in these Areas of Concern and there is a long way to go.”

A total of 27 new projects worth $1.5 million are slated for restoration around the Great Lakes between 2014 and 2015.

“It is a work in progress. What we have to do is continue what was done today,” said Carrie.