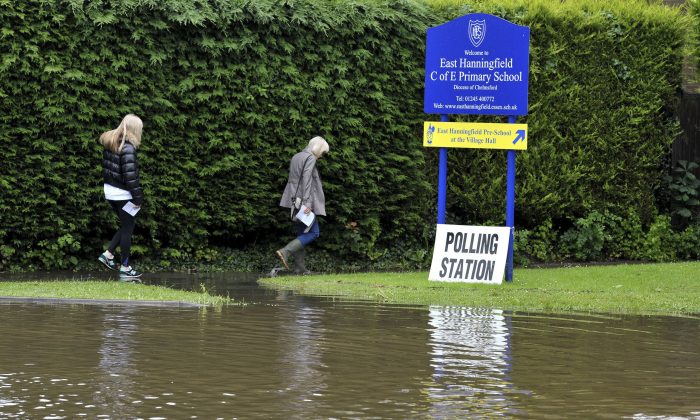 People make their way along a flooded path as they arrive to vote at the polling station in East Hanningfield, Essex, England, on June 23, 2016. (Nick Ansell/file/PA via AP)
UK

The Elections Bill passed on Wednesday night, making it mandatory for voters to show photographic ID across polling booths in Great Britain.

Unlike elections in Europe, where 47 countries need a mandatory national ID card to vote, the new law has brought an end to an era for Great Britain, where identification or even polling cards have never needed to be shown. But critics of digital identification claim the move is unjustified as voter fraud is almost non-existent.

Up to now, when registered to vote, a poll card is sent to one’s address before an election. The poll card tells them where to vote in a general or local election. Then voters put a cross (X) next to their preferred candidate on a ballot paper at the polling station.

The new bill will make photo ID mandatory from 2023.

The government said that it was delivering on its 2019 manifesto that it will protect the integrity of elections and prevent voter fraud. In a statement on Thursday, it said that the new law will stop postal vote harvesting by changing the rules so that people can apply for a postal or proxy vote online through a new online system for absent voters.

Minister for Equalities and Levelling Up Communities Kemi Badenoch MP said that “it is paramount we protect the integrity of our ballot, so our elections remain secure for generations to come.”

“Royal Assent now means we can eliminate election fraud and make elections more inclusive, ensuring that everyone who is eligible to vote will continue to have the opportunity to do so,” she added.

Writing earlier in April for Conservative Home, former Minister for Universities and Science Lord Willetts said that “our electoral system does have its problems, but voter personation does not appear to be a significant one.” He said that “of 58 million votes cast in 2019, there were only 33 allegations of personation at polling stations leading to one conviction and one caution.”

“This is a big change in the way we vote. There will be some voters who turn up to vote at the next election unaware that they need photo ID, and who will be turned away,” added Willetts.

British civil liberties and privacy campaigning Big Brother Watch on Twitter said that the law will do far more harm than good.

“Make no mistake—between voter ID, COVID ID, the new digital ID framework & the push towards biometrics—there is a steady march towards intrusive mandatory ID,” it posted on a Twitter statement in response to the news.

“The case for a compulsory voter ID system has not been justified or explained. Evidence shows that voter impersonation is an incredibly rare crime,” Big Brother wrote in a report (pdf).

It added that “voter ID would largely impact the most marginalised in society, would constitute another step on the road towards an intrusive national ID card scheme, and could lock millions of people out of the democratic process.”

In March, the government concluded its plans to create a “digital identity and attributes governance framework” that will lay the groundwork for the increased acceptance of digital identities across the UK.

However, it added that “there is no public support for ID cards in the UK and has no plans to introduce ID cards.”

Much like in the USA, the issue has become a hot topic in the UK, with the opposition Labour party calling voter ID laws a discriminatory policy that will “disenfranchise millions of voters.”

A London School of Economics blog on the subject noted that Great Britain has no free or low-cost ID option. And that the elderly, people with disabilities, people from ethnic minority backgrounds, and those who are less well-off, all of whom are statistically less likely to own a photo ID.

However, in 2021 the British government said it was looking for supplier partners to “develop new digital services for identity verification and the attainment of voter cards that will be offered to those without any other form of photo identification,” reported Public Technology.

This will allow those without any form of photo identification to apply online for a free ID card that can be presented at polling stations. Though it is not clear how the technologies are expected to work.