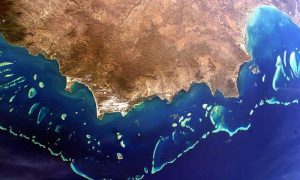 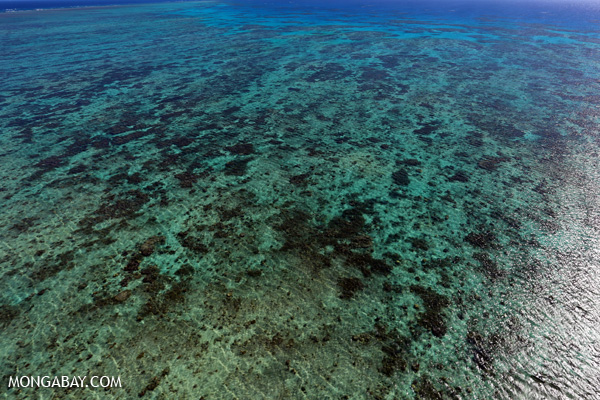 Ariel view of the Great Barrier Reff. Photo by: Rhett A. Butler.
News

By Jeremy Hance
biggersmaller
Print
A consortium of companies—North Queensland Bulk Ports, GVK Hancock and Adani Group—have announced they are giving up on a hugely-controversial plan to dump five million tonnes of dredged sediment in the Great Barrier Reef. The plans ran into considerable opposition from environment, conservation, and tourism groups who feared harm to the world’s largest coral reef system, which is already suffering from global warming, ocean acidification, pollution, and overfishing.

The plan to dump the dredge in the reef was approved by the Australian government in January, but has become a significant political issue since then.

Yet, the dredge will still have to go somewhere. At this point, the companies haven’t made alternative plans public, but they are likely to be land-based.

The dredged sediment will come from a massive expansion of the Abbot Point coal terminal as Australia works to ramp up exports of coal to places like India. The government recently approved the country’s largest coal mine, the Carmichael mine, which is expected to produce 60 million tonnes of coal annually for export.

“The environmental problems of increased shipping through the reef and the export of millions of tonnes of coal to exacerbate climate change would remain,” Waters told the Australian Financial Review.

Coal is the most carbon intensive energy source on the planet. While scientists have warned for decades that countries must wean themselves quickly off coal in order to avoid catastrophic climate change, coal consumption worldwide continues to rise.

This is not the first environmental controversy under Australia’s year-old government under Liberal Tony Abbott. The government has also been criticized for killing its nascent carbon tax; undercutting international climate change negotiations; attempting to open up a World Heritage Site to logging; and slashing environmental regulations, laws, and funding.

This article was originally written and published by Jeremy Hance, a contributing writer for news.mongabay.com. For the original article and more information, please click HERE.
TOP NEWS