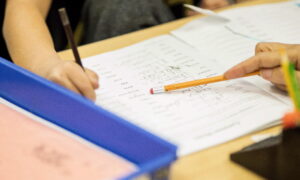 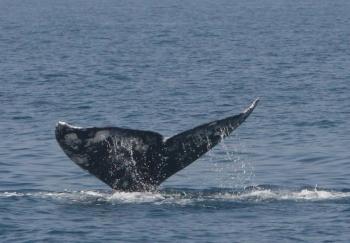 The first sighting of a gray whale in the Mediterranean in 200 years, spotted on May 8 in Herziliya, off the coast of Tel Aviv, Israel. (Courtesy of the Israel Marine Mammal Research & Assistance Center)
International

By Genevieve Belmaker
Print
JERUSALEM—The gray whale, thought to be extinct from the Atlantic Ocean for 200 years, has been sighted off the coast of Israel.

On May 8, the whale was seen off the coast near Herzliya in Tel Aviv by members of a local yacht club traveling in two yachts. After people on one yacht sighted the whale, a second yacht with researchers from the Israel Marine Mammal Research & Assistance Centre (IMMRAC) spotted it as well.

At the time it was thought to be a sighting of a sperm whale, as no gray whale sightings have been made in the region for two centuries. IMMRAC researchers followed the whale for an hour and photographed it.

IMMRAC is sponsored through the Leon Recanati Institute for Maritime Studies at the University of Haifa in Israel. It is a volunteer organization that includes scientists, students, veterinarians and members of the general public. Due to a lack of funding, members often ride with boats that are already going out to sea.

On May 9, the photographs were circulated among IMMRAC scientists, who realized it was a Gray whale. They gender of the animal is unknown.

"Nobody could have, in their wildest dreams, imagined that it was a gray whale," said Dr. Danny Kerem, President of IMMRAC. Kerem was not on the yacht for Saturday's sighting, but said by telephone from Haifa that researchers were shocked to realize a Gray whale had been seen in the Mediterranean.

He added that two additional sightings were claimed on May 9; neither has been confirmed. There is also a "reliable report" that the Israeli Navy spotted the whale two weeks ago. The Israeli Defense Force was unable to confirm the report.

Conservation experts are investigating whether the sighting of a gray whale (long considered extinct in the region) heralds the species' return or is simply a case of a whale that traveled extremely far.

According to Kerem, one theory is that the whale came through broken ice in the north, across the Pacific Ocean, and followed the coast of Europe to the Mediterranean. He says the whale is very thin, and scientists are concerned over whether there is enough food for it to eat. But if one whale made it through polar ice, others might be able to do the same.

"I hope he lives to go back and tell his comrades that they can do it, too," said Dr. Kerem, adding, “he's got a long way to go before he can start eating again."

Only two populations of the whale survive in the Pacific Ocean and their status is critically endangered, according to the International Union for Conservation of Nature. In the western North Pacific ocean, a tiny population of about 130 whales survives, and in the eastern North Pacific there are about 20,000. Their two major migration routes are between Alaska and Mexico, and Russia and China.

“This discovery is truly amazing," said Nicola Hodgins, Whale and Dolphin Conservation Society (WDCS) Species Programme Lead. "Today, gray whales only inhabit the Pacific Ocean, so to find one in the North Atlantic, let alone the Mediterranean Sea, is bizarre in the extreme."

The WDCS is a charitable organization dedicated to the conservation and welfare of all whales, dolphins and porpoises.

According to the WDCS, gray whales perform one of the longest migrations in the world, traveling a 15,000-20,000 km. round trip route every year. Over a lifetime, a gray whale will migrate the equivalent of a round trip to the moon.

However, if the whale spotted off the coast of Israel migrated from the Pacific, it would have shattered all previous distance records.