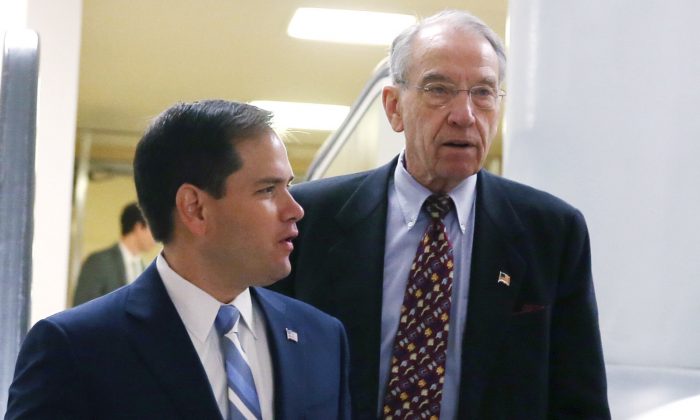 Grassley and Rubio also asked Joanne Chiedi, the acting inspector general (IG) at the U.S. Department of Health and Human Services (HHS), to determine if the department’s Centers for Medicare and Medicaid Services (CMS) “may be providing payments for genetic testing or analysis to U.S. entities that have domestic partnerships with WuXi, BGI, and other genomics companies with ties to the Chinese government.”

The senators noted that “WuXi was the first genetic sequencing facility in China to gain Clinical Laboratory Improvement Amendments (CLIA) certification from CMS.

“It has since gained a foothold in the U.S. Similarly, BGI has publicly announced partnerships with leading American health care systems, including those that accept Medicare and Medicaid patients.”

The CLIA certification, according to the Food and Drug Administration, is the basic tool for the regulation of “laboratory testing” facilities in the United States and requires “clinical laboratories to be certificated by their state, as well as the Center for Medicare and Medicaid Services (CMS) before they can accept human samples for diagnostic testing. Laboratories can obtain multiple types of CLIA certificates, based on the kinds of diagnostic tests they conduct.”

The FBI has warned that WuXi, BGI, and other firms are closely linked to the Chinese Communist regime. President Donald Trump has made it a top priority of his administration to expose and stop the Chinese regime’s long-running use of trade, academic, and intelligence resources to steal U.S. technology.

In January, Director of National Intelligence (DNI) Dan Coats warned Congress, in the intelligence community’s annual worldwide threat assessment, that China “will authorize cyber espionage against key U.S. technology sectors when doing so addresses a significant national security or economic goal not achievable through other means.

“We are also concerned about the potential for Chinese intelligence and security services to use Chinese information technology firms as routine and systemic espionage platforms against the United States and allies.”

The senators said the two firms have publicly touted their partnerships with Huawei in genomic analytics research and development.

“As you know, Huawei is a state-directed Chinese telecommunications company that, according to the heads of six U.S. intelligence agencies, including the CIA, FBI, NSA, and the Director of National Intelligence, possesses the capabilities to ‘maliciously modify or steal information’ and ‘to conduct undetected espionage,’” Grassley and Rubio told Chiedi in a June 10 letter.

“This is the same company that the U.S. recently charged with conspiring to defraud our nation and stealing trade secrets, among other crimes.

“WuXi and BGI’s U.S.-based partnerships give them unique access to genomic data, including Americans’ genomic data. Therefore, it is particularly alarming that these two companies have partnered with Huawei,” the senators told Chiedi.

The NIH defines genomics as “the study of all of a person’s genes (the genome), including interactions of those genes with each other and with the person’s environment.”

Every characteristic of a human being is determined by his or her DNA, making genomics a crucial field on the far frontiers of advanced research on re-sequencing to improve the development, for example, of characteristics like the physical strength, intelligence, and endurance of individual members of a nation’s military forces, according to some futurists’ speculation.

Genomics is also critical to the development of new advanced pharmaceuticals and related treatments for and prevention of deadly diseases such as cancer.

Earlier this year, BGI’s U.S. subsidiary announced the opening of its Mass Spectrometry Center in San Jose, California. In a May 31 news release announcing the new center, the Shenzhen, China-based company touted its “strong track record in the business of providing analytical services, including mass spectrometry, to a global customer base.

Grassley and Rubio told Chiedi that, as of March, “the Congressional Budget Office estimates that the federal government’s gross spending on Medicare in 2018 was $712 billion, while federal Medicaid expenditures were $389 billion, not including the states’ Medicaid spending.”

As result, the two programs “totaled more than $1.1 trillion in federal outlays in 2018—far more than federal funding to the NIH. Taxpayers cover the costs of CMS payments. Accordingly, they have every right to know if their money has gone to entities connected to the Chinese government,” the senators said.