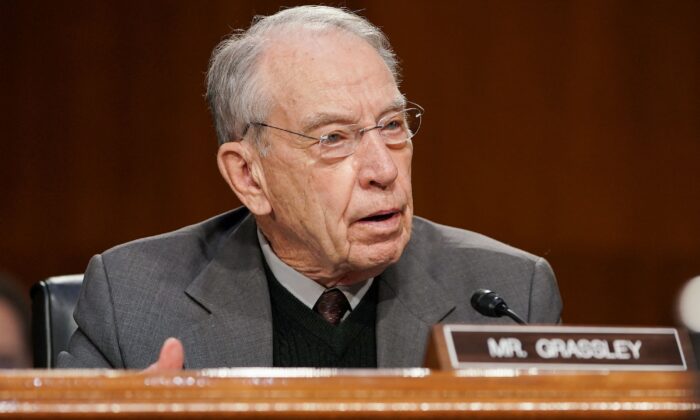 Senate Judiciary Ranking Member Chuck Grassley (R-Iowa) suggested in a recent interview that he disagrees with past statements by GOP leadership downplaying Republican prospects in the 2022 midterms.

Currently, members of both parties are preparing for a tough battle as Democrats seek to hold on to a slim majority in the evenly-divided Senate and Republicans seek to retake the chamber after a two-year stint in the minority. Though 34 seats are up for reelection, only a few are in play, and observers remain divided on who will emerge with the majority after the midterms.

However, in a statement that caused a rift in the Republican Party, Senate Minority Leader Mitch McConnell (R-Ky.) suggested some pessimism over his party’s prospects at the end of August, saying the GOP only has a “50-50” chance of retaking the majority.

“Flipping the Senate, what are the chances? It’s a 50–50 proposition. We’ve got a 50–50 Senate right now. We’ve got a 50–50 nation. And I think the outcome is likely to be very, very close either way,” McConnell told the Georgetown/Scott County Chamber of Commerce in Kentucky when asked about the race.

“If both the House and the Senate flip, I think the president will be a moderate,” McConnell said. “He won’t have any choice. And so, we’ll try to find ways to make some progress for the country during the last two years of his term … but not big dramatic change.”

Those comments came a week after he made a more dire prediction to local media by saying Republicans aren’t likely to take the Senate. He blamed “candidate quality” as the reason for the lowered expectations.

Following the statement, Sen. Rick Scott (R-Fla.)—chairman of the National Republican Senatorial Committee (NRSC), the top Senate GOP electioneering and fundraising group—blasted back in a statement that some have suggested was a direct response to McConnell, although Scott has denied this.

In an op-ed for the Washington Examiner, Scott decried “treasonous” Republicans for “trash-talking” Senate GOP candidates.

The piece was seen as the latest in a series of squabbles between McConnell and Scott, two of the most important Republicans planning the Senate GOP strategy in 2022.

Though he did not weigh in on the infighting, which many Republicans have been anxious to downplay, Grassley suggested during a recent appearance on Fox Business that he is sanguine about the party’s prospects, despite McConnell’s gloomier predictions.

“I think we got good candidates in most states and we’ll take the Senate by 52 votes to 48,” Grassley said. “Remember, we have 21 Republicans up and only 14 Democrats, so the numbers are against us, but we’ve got real opportunities.”

He continued: “You got to remember that [President Joe Biden] is underwater as far as approval, particularly for the economy and particularly in the question of, is the government headed in the wrong direction,” he said, adding that he heard this sentiment from his constituents at town meetings throughout the month of August.

According to Rasmussen’s daily presidential tracking poll, which compiles data about presidential approval over time, as of Sept. 7, Biden had an approval rating of 44 percent compared to 48 percent approval for President Donald Trump at the same point in his presidency.

McConnell, like Grassley, has emphasized an approach that focuses largely on attacking and presenting an alternative to Biden and the Democratic majority in the 117th Congress.

Grassley continued: “This country is heading down the wrong road with the polls showing almost 70 percent of the people saying the country is headed in the wrong direction—and head-to-head, generic Republican versus Democrat, it’s even-even.

“We could be down nationally by 2 percentage points and still have a tremendous victory in the House of Representatives and still take over United States Senate. That is what polls in previous elections have shown. We don’t have to be way more popular than the Democrats to take control of the Congress, particularly when history is on our side.”

In the current landscape, Senate strategists on both sides are focusing the bulk of their attention and funds on a few key battleground states, including Pennsylvania, North Carolina, Georgia, Wisconsin, Arizona, Ohio, and Nevada.