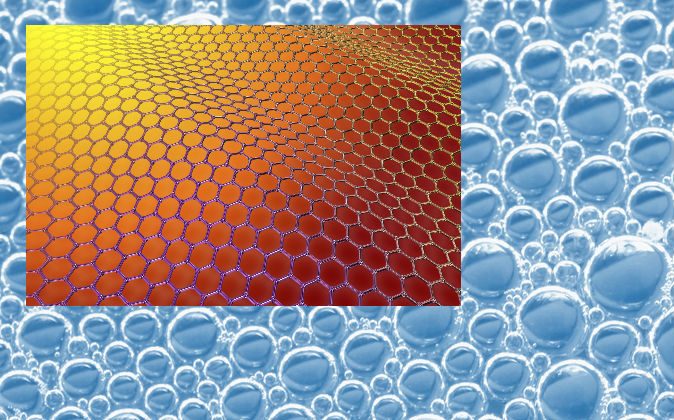 A new graphene oxide foam is super strong and can bounce back after being stretched and compressed.

In microscopic images, the foam dubbed “GO-0.5BN” looks like a nanoscale building, with floors and walls that reinforce each other. The structure consists of a pair of two-dimensional materials: floors and walls of graphene oxide that self-assemble with the assistance of hexagonal boron nitride platelets.

The researchers, led by the Rice University lab of materials scientist Pulickel Ajayan, say the foam could find use in structural components, as supercapacitor and battery electrodes, and for gas absorption, among other applications. Their findings are detailed in the online journal Nature Communications.

Graphene oxide (GO) is a variant of graphene, the hexagonal lattice of carbon atoms known for its superior strength and conductivity. It can be produced in bulk by chemically exfoliating oxidized graphite. Hexagonal boron nitride (h-BN) looks like GO, with the same “chicken wire” array of atoms. An insulator known as “white graphene,” h-BN has an ability to form seamless interfaces with graphene that has led to the creation of interesting hybrid materials at Rice and elsewhere.

Soumya Vinod, the Rice graduate student who co-led the project, says she and her colleagues expected adding h-BN to graphene oxide would toughen the resulting foam, but “the ordered, layered structure was not entirely expected.”

“Once we observed the structure, we knew it was very different from the other nanoengineered foams reported and could lead to very interesting properties,” she says.

Those properties include the ability to handle a great deal of strain and still bounce back to its native form. This is remarkable, Vinod says, for a material so light that a stray breath in the lab would send the small samples flying.

Both components of the new material start as cheap, plentiful powders. Atom-thick layers of graphene oxide and h-BN are chemically exfoliated from the powders, mixed in the proper proportion with a few chemical catalysts and freeze-dried. The resulting foam takes the shape of the container and is 400 times less dense than graphite.

For testing, Vinod and her colleagues made foams of pure graphene oxide and foams with h-BN at 25 and 50 percent by weight. The 50 percent h-BN version was found to be the most mechanically stable, though she expects to optimize the mix—and increase the size—with further experimentation. “We found that more concentration of h-BN leads to low structural integrity, but we’ve yet to optimize the right amount,” she says.

A close-up look at the foam revealed the floors as self-assembled sheets of overlapping GO flakes. Cross-linking platelets of h-BN were uniformly distributed throughout the material and held the sheets together.

Samples the size of a pencil’s eraser were compressed with one or two pennies to see how well they would bounce back.

The h-BN platelets connect to graphene oxide and absorb stress from compression and stretching, preventing the GO floors from crumbling and significantly enhancing the material’s thermal stability, Vinod says. The platelets also prevented the propagation of cracks that destroyed samples with less or no h-BN.

The US Air Force Office of Scientific Research, the National Science Foundation, and the Indo-US Science and Technology Forum supported the research.

*Image of foam via Shutterstock