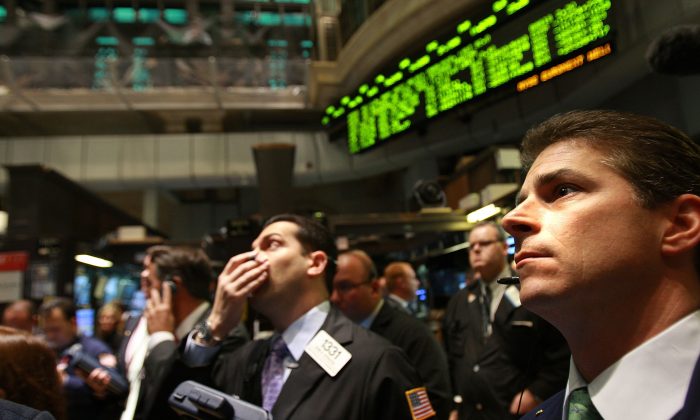 Trader working on the floor of the New York Stock Exchange during the frantic days of the Lehman crisis in on Oct. 13, 2008. (Spencer Platt/Getty Images)
Business

Grant Williams has seen it all. The collapse of Japanese real estate and equity markets when he started his career in Tokyo in the late 1980s; the bursting of the dot.com bubble when he was on assignment in New York in the early 2000s; and the great financial crisis of 2008 when he was stationed in Australia.

Having witnessed these events as a finance professional during his exciting career, Grant is now disseminating the insight he gained through decades of experience via a very popular newsletter, “Things That Make You Go Hmmm …

Grant never pulls a punch and focuses on the things that really matter, like debt and the monetary system, as well as gold. He spoke to Epoch Times about the things that make him go “hmmm …” in today’s market environment.

Grant Williams: The last financial crisis in 2008 was a wake-up call for many people and unfortunately as time has gone by, the fear of 2008 has subsided. It felt like a big deal at the time, but here we are several years later at all-time highs in the stock market. The year 2008 was just a blip.

Now problems were papered over by central banks and governments and the fact that people felt safe in the interim is dangerous. When the storm comes back, the central banks are completely out of bullets.

The Federal Reserve is so desperate to get rates back up. They can see there is another shakeup coming, but with rates at zero they can’t do anything. We are in a situation that the Fed is reacting to market forces and they can’t be proactive. They are hoping desperately that the status quo continues if they stay out of the way and, over time, things slowly repair themselves. Unfortunately, through their actions since 2008, they have backed themselves into a corner and have nowhere left to go.

We saw, in 2008, that when these things reach critical junctures, really bad things–things that most people simply didn’t see coming–could happen. Here we are six years later and people assume that bad things can’t happen again and that is purely a resut of the safety blanket thrown over markets by central banks.

Epoch Times: What are the risks now?

Mr. Williams: It won’t be the same because previously the trigger was subprime mortgages. That’s not going to be the problem now, but we have seen an enormous private to public transfer of liabilities. People have forgotten what happens when the bonds governments have been buying go ‘boom.’ And, from time to time, they do go ‘boom.’ This time it’s going to be on a magnitude far greater than 2008 and it’s the taxpayers who will suffer.

The biggest risk is now concentrated on the public balance sheet. Around 83 percent of Greek debt is held by the IMF, the ECB, and other European countries. Only 17 percent is in the private sector. If Greece goes to the wall these central banks will take a massive hit. They don’t have any other means to fill the holes left than increasing taxes and printing money.

At some point you can’t just print money and everything will work out. Instinctively, I have to believe that everybody knows that–if you could, why would anybody work? The problem, perversely, is that, up until now, it kind of has worked. But … just because something works for a period of time, it doesn’t mean it’s going to work forever. Just because something hasn’t happened, doesn’t mean it won’t happen. And the day it does happen, well, by then it will be too late.

It won’t be the same trigger point. Could it be excessive quantitative easing by central banks? Yes. Could it be the loss of control of a sovereign bond market by the Bank of Japan for example? Yes. Could it be a dangerous escalation of the ongoing currency wars? Yes. Is it going to dawn on people that there is no real growth in the world and this simple realization has a long overdue–and extremely negative–impact on stocks? Yes. We don’t know which direction the next wave of the crisis is going to come from.

Now, all these other problems, people are simply looking past because of the central banks. Once one surfaces though, the markets will be forced to face the other ones simultaneously and, once you do that, you realize that the world is a very dangerous place indeed.

US Fed Tapering and Its Unintended Consequences

Epoch Times: So what does all this boil down to?

If you look at the level of growth in the world, it just doesn’t justify equity market valuations. Look at places like biotech; a huge bubble. Really what is keeping stuff going is the belief that the Fed will continue to get policy just right.

Confidence is, by definition, very ephemeral, you can’t measure it with any great degree of accuracy. At any point in time, something unforeseen can shake the market’s confidence, as we saw with the taper tantrum. If there is a loss of confidence, it’s something that you won’t see coming and it will happen very quickly.

People are investing because they are afraid of missing out and sitting on the sidelines when the markets are going up. But now is a time you need to evaluate everything that is going on in a cold, analytical way and try to minimize the emotional component of your decisions.

It’s hard to justify continuing to be fully invested in markets just because they continue to go up – particularly if that is the rationale of the majority of investors as it seems to be today. Anytime the consensus is to simply be long because markets are going up it doesn’t tend to end very well.

Fed’s Taper Reason Is Not the Economy

Epoch Times: How can investors protect themselves?

There is nothing you can realistically do to completely insulate from a 2008-type of event. In a bear market the one who loses the least wins. You have to avoid taking outsized risks and look carefully at the risk reward profile of every component of your portfolio.

Gold is something that can protect you from some of these problems. It can certainly ring-fence your portfolio and it has the distinct advantages of having zero counterparty risk–assuming you have physical custody of your metal–and it’s completely uncorrelated to other assets.

People get caught out and fixate on the price of gold. This is the wrong rationale if you are not buying it as a trading vehicle. It’s a currency; it’s an insurance policy. Holding physical cash is also sensible when things feel like they could go awry. In times of dislocation, cash is the best option you can have because it gives you flexibility.

Governments around the world are floating trial balloons on the road to banning cash. This idea of governments abolishing cash and completely regulating money hasn’t received the attention it deserves. Look at Cyprus and the compulsory bail-in. That should have been a massive wake-up call for people and yet, with Greece on the brink of capital controls, there is still, apparently, about 133 billion on deposit in Greek banks.

All these things are happening. They are happening quietly but in full view of everybody. Central banks have prevented the catastrophic collapse from occurring but at what potential cost? People have become incredibly complacent.

Epoch Times: So what are you doing besides your newsletter to help people to protect their portfolios?

Mr. Williams: What we are trying to do with RealVisionTV is to help educate people about the dangers they face, and we try to do that through the minds of the finest investors on the planet. The idea is a simple one: find smart people who understand the corner of finance they work in and then let them talk. No bias, no ‘angle,’ just allow them to lay out their thinking for the world to hear. Then, let’s trust the audience to make up its own mind. The reality is that none of us know what’s going to happen.

We are talking to people whose intellectual framework is rigorous, because that is how you give yourself the best chance of avoiding bad outcomes. If you listen to enough smart people you can distil that into your own framework. Ultimately you have to make up your mind how to manage your portfolio, but the more intelligent inputs you have into those crucial decisions, the better chance you have of coming up with a solution to your specific problems.

Mr. Williams: Simon Hunt came on the channel talking about his views on China. He has spent a significant amount of time there each year for well over 20 years and he has built an incredibly impressive network.

Simon believes that what most people perceive as the Chinese central bank injecting liquidity into the market is actually being done to liquefy the banking sector in order to facilitate a series of changes in the Chinese manufacturing economy.

He has been talking about the prospect of the PBoC doing that for the last six months. Now we see more people coming out and beginning to talk about the same idea.

Lee Robinson was talking about all kinds of potential bad outcomes and what investors has to do to protect themselves from, for example, increased taxation.

These are not ideas you can simply put into a box. The more you listen to smart people talk about stuff they are passionate about and they understand well the more prepared you are to make decisions about your own financial needs.