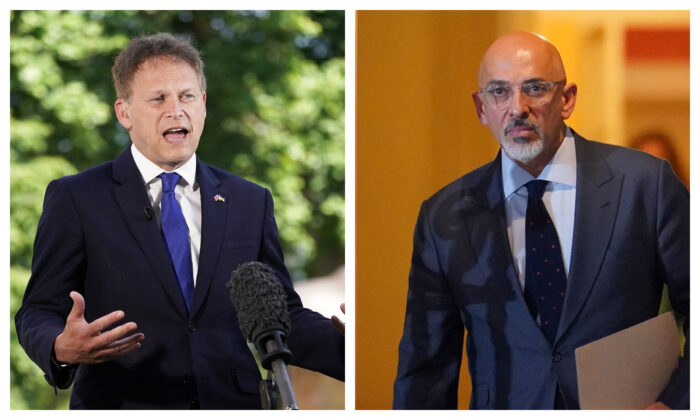 Transport Secretary Grant Shapps and Chancellor of the Exchequer Nadhim Zahawi on Saturday evening launched their bids to be the next British prime minister.

In an interview with The Sunday Times, 53-year-old Shapps said he wants to end the “two-and-a-half years of tactical government by an often distracted centre” and build a “strategic government, sober in its analysis, and not chasing the next headline.”

The report said Shapps aspires to tackle the cost of living crisis and make the UK’s economy the biggest in Europe by 2050.

It also said Shapps plans to produce an emergency budget, cut personal tax for the “most vulnerable,” and provide businesses with high levels of energy consumption with financial support in his first 100 days in office.

Defending his loyalty to Johnson, Shapps said he had “never, for a moment,” doubted Johnson’s love of this country despite “all his flaws,” adding that Johnson “makes a unique connection with people.”

He also said he had not “spent the last few turbulent years plotting or briefing against the prime minister [and] mobilising a leadership campaign behind his back,” appearing to take a swipe at some of his opponents, including former chancellor Rishi Sunak, whose campaign website was reportedly registered in December last year.

Shapps said he “share[s] absolutely the prime minister’s belief in the necessity for strategic improvements to infrastructure and private and public R&D spending as the key to unlocking our underperforming regions,” but would rein in state control in other areas.

“I do think we have lost sight of what we should be about as a Conservative government. We should trust people and allow them to spend their money as they wish. We must map a clear path to lower taxes, not just expressing good intentions. COVID witnessed a necessary and extraordinary expansion of state spending and a quite unprecedented level of state interference in people’s private lives. As Conservatives, we should tolerate the unnecessary continuation of neither,” Shapps said.

Having served in the shadow cabinet in 2007 and as a Cabinet minister in 2010, the MP for Welwyn Hatfield is currently the candidate with the most political experience, according to The Sunday Times.

The former education secretary became the third serving government minister to kick off their campaign for leadership after Shapps and Attorney General Suella Braverman declared their intentions.

He has had something of a tumultuous week—first being promoted to chancellor following Sunak’s resignation on Tuesday, then defending Johnson during a gruelling broadcast round on Wednesday, before publicly calling for him to stand down on Thursday morning.

Launching his campaign, Zahawi pledged to lower taxes for individuals, families, and businesses, boost defence spending, and continue with education reforms that he started in his previous role.

“My aim is a simple one: to provide the opportunities that were afforded to my generation, to all Britons, whoever you are and wherever you come from. To steady the ship and to stabilise the economy,” Zahawi said.

“Thanks to Brexit, we are now a free nation. Let’s not just talk about the opportunities that follow, let’s take them.”

Referencing his own experience, Zahawi said, “If a young boy, who came here aged 11 without a word of English, can serve at the highest levels of Her Majesty’s government and run to be the next prime minister, anything is possible.”

He added that he wants to “focus on letting children be children, protecting them from damaging and inappropriate nonsense being forced on them by radical activists.”

Born in Iraq to a Kurdish family, the new chancellor came to the UK when his parents fled the regime of Saddam Hussein.

Believed to be one of the richest politicians in the House of Commons, he helped found polling company YouGov after studying chemical engineering at University College London.

He has often said that his own personal backstory has deeply influenced his view of Britain and he recently spoke of the debt he owed poet Philip Larkin as he improved his English as a teenager.

Braverman was the first serving minister to confirm her intention to run.

Asked on Thursday whether she would run if there was a leadership contest, Braverman told ITV that it would be “the greatest honour” to serve as the UK’s prime minister because she owes “a debt of gratitude to this country.”

“I love this country. My parents came here with absolutely nothing, and it was Britain that gave them hope, security, and opportunity,” the attorney general said, referring to her Indian parentage.

Asked what her priorities would be, Suella replied with a list including “some proper tax cuts,” cutting the size and spending of the government, solving the problem of boats carrying illegal immigrants across the English Channel, and getting rid of “all of this woke rubbish and actually get back to a country where describing a man and a woman in terms of biology does not mean that you’re going to lose your job.”

The hardline Brexiteer also said the government needs to “make sure that Brexit opportunities are felt for everybody in this country” and “stop a foreign court interfering in our domestic affairs,” appearing to allude to the European Court of Justice and the European Court of Human Rights.

Defence Secretary Ben Wallace, who topped a list of favourite potential candidates in a recent poll, confirmed on Twitter on Saturday that he will not run, saying his focus is on his current position and “keeping this great country safe.”

Former minister Steve Baker has thrown his support behind Braverman’s bid, despite previously saying he was seriously considering putting himself forward for the top job.