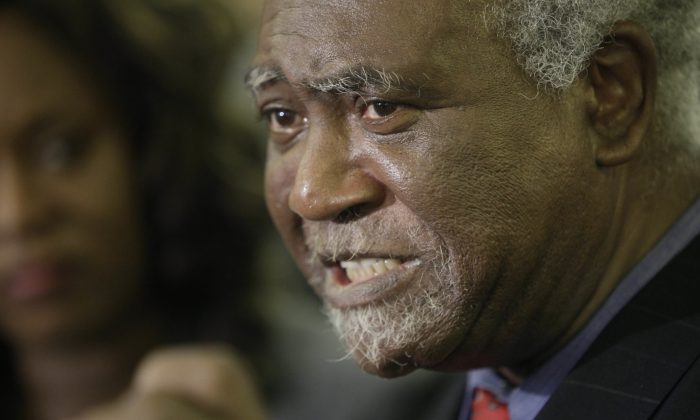 In this Nov. 9, 2009 file photo, U.S. Rep. Danny Davis, D-Ill. announces that he will run for re-election to this 7th congressional seat in Chicago. (AP Photo/M. Spencer Green)
Crime and Incidents

Grandson of US Rep. Davis Victim of Chicago Gun Violence

CHICAGO—The grandson of Illinois U.S. Rep. Danny Davis was fatally shot during in a home invasion in Chicago, the Democratic congressman and police said.

Jovan Wilson, 15, died Friday night at the scene in the Englewood neighborhood on the city’s South Side, Officer Michelle Tannehill told the Chicago Tribune.

Davis said in a statement that a 17-year-old girl and 15-year-old boy forced their way into the home and after an argument the 15-year-old shot Wilson in the head. Davis said Wilson’s mother was not at home, but Wilson’s uncle and three siblings were.

Police spokesman Anthony Guglielmi told the newspaper Saturday that it was not a random incident, and that Wilson and the two people being sought had a history.

Chicago has seen a dramatic rise in the number of shootings and homicides, with August being the deadliest month in the city in two decades. There have been more than 600 homicides this year, including the fatal shootings of the cousin of Chicago Bull Dwyane Wade, a Chicago police officer’s son and the son of a famed percussionist.

Davis, who was re-elected this month to his 11th term in the 7th Congressional District and is a former Chicago alderman, was in Chicago on Friday and spoke with reporters after talking to police. He wondered how the shooter obtained the gun and said he’d continue to try to combat gun violence.

Davis described his grandson to the newspaper as a “typical 15-year-old” who liked music and basketball, someone who “knew all about … the stats of different players.” But Davis also said he recognized that Chicago’s violence problem could affect his family.