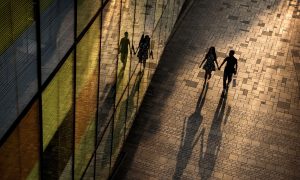 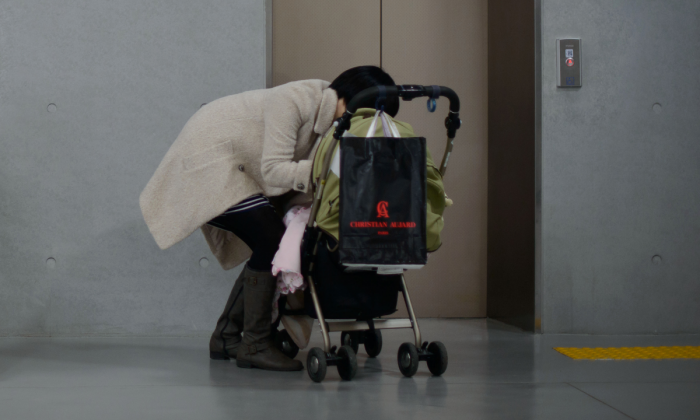 A woman and her baby waiting to get on the elevator. (Ed Jones/AFP/Getty Images)
Social Issues

An child who is allowed to behave this way is often called a “bear child” in China, a result of the Chinese Communist Party’s (CCP) one-child policy.

In the short video posted by Weibo user “Won’t again be no good,” a grandmother is holding her grandson up to the elevator buttons. Many of the buttons are illuminated, suggesting the boy has been pushing them at random.

“Ma’am, letting the kid press all the buttons like that isn’t good,” the young woman said in an annoyed voice. “How can other people take the elevator when he does this?”

“Kids don’t understand,” the grandmother responded defiantly. “Why are you getting in our business? … You can go take the stairs.” The grandmother puts the boy down on the floor, then he whines and reaches up for the lights. She puts her hand on his, unclear if she will help him or stop him.

“No—no, ma’am, if you are going to be like this, then I’m really not going to be nice,” the woman said.

“And what are you going to do about it?” asked the grandmother in an unconcerned way. The woman reaches into a bag near the camera, and then pulls out something as the video fades to black.

Then her revenge begins. “Oh my goodness!” the young lady said. She bites into the white ice cream bar, emphasizing how much she is enjoying the treat.

The boy stares at her, appearing mesmerized by the ice cream bar. “This is so sweet!” the young lady said. His mouth hangs open as he fidgets next to his grandmother.

“We don’t eat that, ya?” the grandmother said, now kneeling down next to the boy, hugging him. The boy is already whining as his gaze is locked onto the ice cream bar. He hugs his grandmother and tries to look away. “It’s winter, we’re not having ice cream.”

“It’s the most delicious in winter!” the young lady said loudly back to them. The boy whines more loudly.

“It’ll make your stomach hurt,” the grandmother said, trying to convince the boy to not want the treat. The boy is already trying to escape from his grandmother’s grasp, crawling over her arms and crying. “When we go home, grandma will make you tasty food.”

“Would Granny trick you?” the woman said, as the child struggles and cries with more effort. “Grandma can’t lie to you, right?”

“It’s sweet!” shouted the young lady. The child was about to cry as his whining got even louder.

Colloquially called “bear children,” also called “little emperors,” is a direct side effect of the CCP’s one-child policy. A standard family for many years under this one-child policy was called a “four-two-one” family, meaning: Four grandparents, two parents, one child.

This has also warped the traditional structure of the Chinese family. In the past, large families with many children were centered around the patriarch. In the recent 30 years, all the focus shifted on the individual child.

This has damaged the traditional Chinese concept of filial piety and younger generations looking after older generations.

In China, grandparents often raise children, while parents go to work. The modern phenomenon of four grandparents looking after one child has made for many spoiled children, or little emperors.

This has led to raising some bear children, the kids who will act recklessly without parental control.

A famous TV personality in China named Meng Fei made a comment related to this on Weibo. “The awful noise from bear children is far from that of their parents and grandparents,” wrote Meng. He later deleted the post.