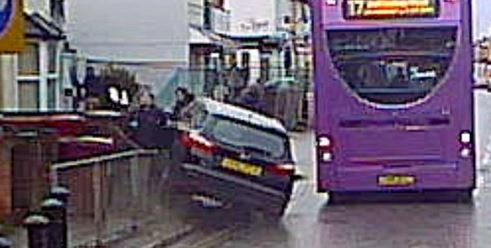 A grandmother in southern England was sentenced to prison after being convicted of slamming into a pedestrian and killing her.

Pertpall Sall, 68, ran into a crowd in the city of Reading and left Sonata Saulytyte, 44, dead and other people injured.

Prosecutors said that Sall made a critical mistake—she pressed on the accelerator when she meant to press on the brake.

Prosecutor Alan Blake said in court that the defendant got out of her car after the crash and made a series of puzzling comments, including the assertion that Saulytyte’s body, which was left under rubble, “was already there.”

Blake said the grandmother also claimed she hadn’t done anything wrong while also saying her brakes had failed.

“She was taken to hospital for a checkup before she was taken to the station and here it is noted she was saying ‘I lost my brakes.’ It was also noted that she wasn’t wearing her prescription glasses that her license said she should,” he said, reported Metro.

She eventually admitted her guilt.

Footage of the crash was caught on a dashcam, reported The Sun.

Among the others hit, a 20-year-old man was left with life-changing injuries to both his legs.

Judge Paul Dugdale said that the killing was not on purpose but nevertheless deserved jail time.

“This is not the sort of dangerous driving where you deliberately made the decision to drive badly. It’s a piece of driving where you made a serious mistake, which had tragic consequences,” he said, reported the Mirror.

“Sometimes we all need to remind ourselves when we get behind the wheel we have an enormous responsibility to others. If we fail in that we put the lives of others at risk.”

Grandmother mounts pavement and kills pedestrian in horror crash is jailed for only 28 months https://t.co/xjtlDB4Kio

Sall’s five children traveled to the United Kingdom from Dubai for the hearing.

Dugdale said that it was clear the accident was the result of unintended acceleration, where the driver mistakenly stepped on the gas instead of the brake.

“It was driving that created a significant risk of danger, notwithstanding anything deliberate. But we must take into account there was more than one victim and it went on for a prolonged six seconds,” he said.

She will also be disqualified from driving for six years after she is released from prison.