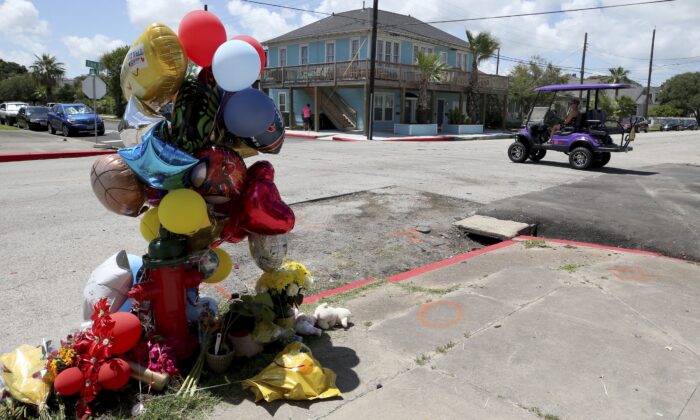 GALVESTON, Texas—The four people killed in a weekend golf cart collision in Texas were a grandfather, two of his grandchildren, and a niece who were visiting Galveston for a quick vacation before school began, police said.

The crash happened Saturday after a driver accused of being intoxicated ran a stop sign and crashed into a pickup truck, which then hit the golf cart that was carrying six people. Police on Monday identified the four killed as Felipe Bentancur, 49; his niece, Destiny Uvalle, 25; and two grandchildren, Kaisyn Bentancur, 4; and Brailyn Cantu, 14.

All four were from Rosenberg, a Texas city about 30 miles southwest of Houston, police said.

Two others on the golf cart were critically injured, authorities said.

The driver of the SUV, Miguel Espinoza, 45, has been charged with four counts of intoxication manslaughter. He remained jailed Tuesday on $400,000 bond, and it wasn’t clear whether he had an attorney who could speak on his behalf.

Golf carts are a popular way to get around the island resort area, which is on the Gulf of Mexico. Police have said they believe the golf cart was operating legally at the time of the collision.