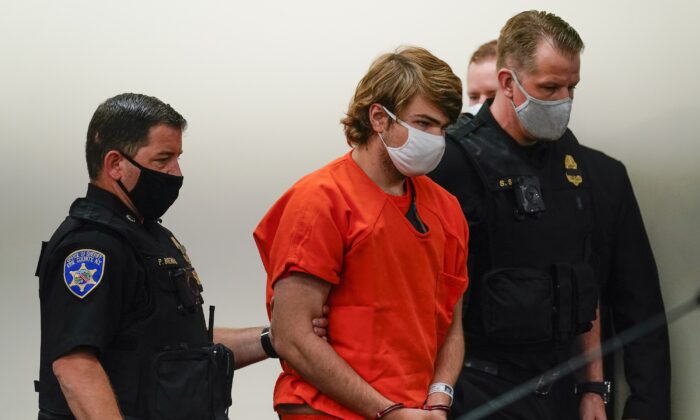 Payton Gendron is led into the courtroom for a hearing at Erie County Court in Buffalo, N.Y., on May 19, 2022. (Matt Rourke/AP Photo)
US News

In a 25-count indictment, a grand jury charged the 18-year-old Buffalo supermarket shooter with domestic terrorism and first-degree murder on June 1.

Payton Gendron, who is accused of shooting 10 black people at the Tops Friendly Market in Buffalo, New York, was charged with a 25-count indictment by a grand jury on June 1, according to a copy of the indictment obtained by local news station WKBW.

Gendron opened fire on shoppers at the supermarket on May 14, killing 10 people ranging in age from 32 to 86 and wounding three others. Gendron surrendered and was indicted on May 19 on a single count of first-degree murder, covering all 10 deaths at the supermarket.

Federal authorities found that Gendron detailed his plans in groups on the online discussion platform Discord prior to the shooting and then livestreamed the attack from a camera mounted on his helmet.

Authorities are investigating Gendron’s online postings and whether social media platforms used by Gendron were liable for “providing a platform to plan and promote violence.”

“These outlets must be more vigilant in monitoring social media content. And certainly, the fact that this act of barbarism, this execution of innocent human beings could be livestreamed on social media platforms and not taken down within a second, says to me that there is a responsibility out there,” New York Gov. Kathy Hochul told reporters at a press conference on May 14.

More details on the charges will be announced June 2 during Gendron’s arraignment.