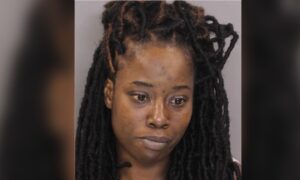 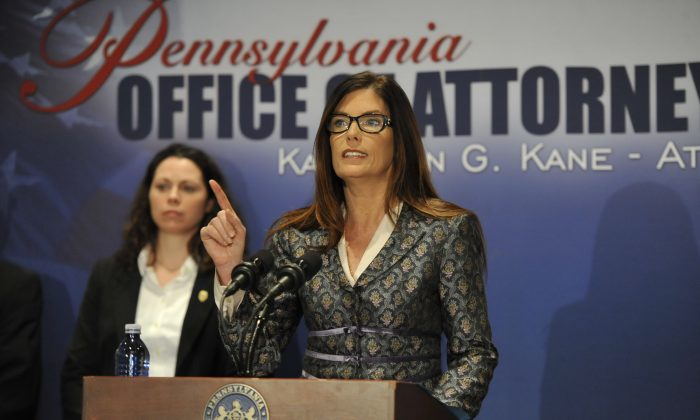 Pennsylvania Attorney General Kathleen Kane speaks about the 147-page report on sexual abuse in the Altoona-Johnstown Diocese was made public at a news conference in Altoona, Pa., on March 1, 2015. Kane says none of the alleged criminal acts can be prosecuted because some abusers have died, statutes of limitations have run their course and victims are too traumatized to testify. (Todd Berkey/The Tribune-Democrat via AP)
Crime and Incidents

ALTOONA, Pa.—Two Catholic bishops who led a small Pennsylvania diocese helped cover up the sexual abuse of hundreds of children by more than 50 priests and other religious leaders over a 40-year period, according to a grand jury report that portrays the church as holding such sway over law enforcement that it helped select a police chief.

The 147-page report issued Tuesday on sexual abuse in the Altoona-Johnstown Diocese, home to nearly 100,000 Roman Catholics, was based partly on evidence from a secret diocesan archive opened through a search warrant over the summer.

These predators desecrated a sacred trust and preyed upon their victims in the very places where they should have felt most safe.
— Kathleen Kane, Pennsylvania attorney general

“These predators desecrated a sacred trust and preyed upon their victims in the very places where they should have felt most safe,” Kane said in a statement. “Just as troubling is the cover-up perpetrated by clergy leaders that allowed this abuse to continue for decades.”

No criminal charges are being filed in the case because some abusers have died, the statute of limitations has expired, or victims are too traumatized to testify, she said.

Of the victims, Kane said: “Their souls were killed as children. They weren’t out playing baseball; they were trying to avoid priests.”

The report was especially critical of Bishops James Hogan and Joseph Adamec. Hogan, who headed the diocese from 1966 to 1986, died in 2005. Adamec, who succeeded him, retired in 2011.

Adamec cited possible self-incrimination in refusing to testify before the grand jury. But in a court filing, his attorney said the accusations against the 80-year-old Adamec are unfounded. He required 14 priests accused under his watch to undergo psychiatric evaluation, the filing said. Nine of them were suspended or removed from ministry, and the five who were reinstated never re-offended, his attorney wrote.

“Bishop Adamec’s handling of abuse allegations has no similarity to other clergy abuse scandals,” his attorney wrote.

The current bishop, Mark Bartchak, is not accused of any wrongdoing. He recently suspended a few priests named as alleged abusers in the report, though the grand jury said it remains “concerned the purge of predators is taking too long.”

In a statement, Bartchak said: “I deeply regret any harm that has come to children.”

The clergy sex abuse crisis erupted in 2002, when The Boston Globe persuaded a judge to unseal files from the Boston Archdiocese.

The clergy sex abuse crisis erupted in 2002, when The Boston Globe reported that the Boston Archdiocese had transferred child-molesting priests from parish to parish to protect them. Similar scandals involving hundreds of offenders and victims have since erupted across the U.S. and beyond.

The U.S. Conference of Catholic Bishops estimates that American dioceses have paid nearly $4 billion since 1950 to settle claims with victims.

The Altoona-Johnstown report said that the abuse was committed in such places as campsites, confessionals, an orphanage and the cathedral, and that Hogan covered up allegations by transferring offending priests, including one who was sent to a school for boys.

One diocesan official under Hogan, Monsignor Philip Saylor, told the grand jury that church officials held such clout in the eight-county diocese that “the police and civil authorities would often defer to the diocese” when priests were accused of abuse, the report said. Saylor told the grand jury that the mayors of Altoona and Johnstown even consulted him on their choices for police chief in the 1980s.

“Politicians of Blair County were afraid of Monsignor Saylor, and he apparently persuaded the mayor to appoint me as the chief of police,” former Altoona Police Chief Peter Starr testified.

The Rev. Thomas Doyle, a Catholic canon lawyer turned advocate for victims, said it was common for law enforcement in heavily Catholic areas to defer to the church in handling accusations against priests.

He said the number of victims and accused priests in the Altoona-Johnstown Diocese, which ranks in the bottom half of the list of the nearly 200 U.S. dioceses by Catholic population, did not surprise him: “I’ve seen dioceses the same size or smaller where you have significant numbers of perpetrators and victims.”

The report said Adamec or his staff threatened some alleged victims with excommunication and generally worked harder to hide or settle allegations of abuse than to discipline the priests accused.

“The diocese will not apologize or take responsibility for its dark history,” the report said.

Clergy abuse scandals are not new to the Altoona-Johnstown Diocese.

The latest investigation began when Kane’s office was asked to review the handling of abuse allegations at Bishop McCort Catholic High School against an athletic trainer, Franciscan Brother Stephen Baker, who worked there from 1992 to 2001. Baker killed himself in 2013 after abuse settlements with an Ohio diocese where he formerly worked were publicized.

Eighty-eight former McCort students settled claims against the diocese for $8 million in 2014, said Richard Serbin, an Altoona attorney whose been battling the diocese for decades.

A molestation lawsuit against since-defrocked priest Francis Luddy that went to trial in 1994 also exposed many of the problems outlined in the grand jury report. The case led to a verdict of more than $2 million in damages and an appeals court finding that Hogan’s oversight of pedophile priests had been “outrageous.”

“Hundreds of children probably could have been saved from a life of misery had they done something back then and, more importantly, a lot of these child predators could have been criminally prosecuted,” Serbin said.