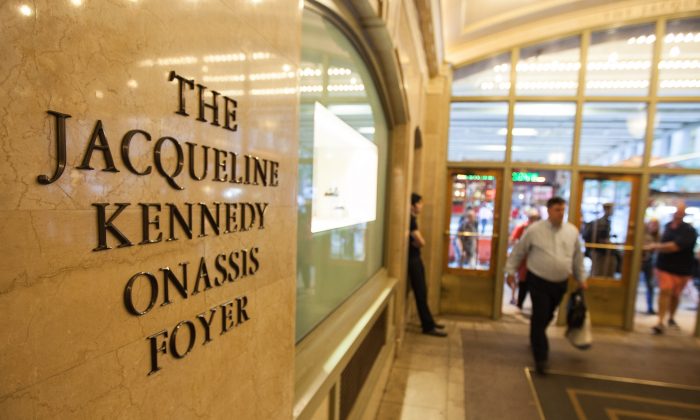 NEW YORK—Jacqueline Kennedy Onassis worked for years to save Grand Central’s unique beauty, and on Monday the terminal’s fully renovated main entrance was named in her honor.

The renovation of the entrance on East 42nd Street and Park Avenue was first conceived during Grand Central Terminal’s centennial celebration last year. The project cost $465,000.

As part of the renovation, the vintage lighting fixtures were cleaned and restored, the marble floors and walls were restored and polished, and the doors were refurbished, among other repairs. A new plaque honoring Kennedy Onassis’s work now adorns the walls. In addition, two digital screens show images of Grand Central’s 101-year history and Kennedy Onassis’s work to save it.

The terminal’s future was threatened when plans to build a 53-story skyscraper on top of it were floated. Kennedy Onassis first helped advocate for the terminal’s preservation and eventually became the public face of the campaign to save it.

Since Kennedy Onassis was the president’s wife, her name elevated the campaign to a new level. Her passion changed hearts too. When the terminal needed the then-mayor Abraham Beame’s support, Kennedy Onassis penned a gripping letter to him in longhand on her signature blue stationery:

“Dear Mayor Beame … is it not cruel to let our city die by degrees, stripped of all her proud moments, until there is nothing left of all her history and beauty to inspire our children? If they are not inspired by the past of our city, where will they find the strength to fight for her future? Americans care about their past, but for short term gain they ignore it and tear down everything that matters …”

Within a week of receiving that letter, Beame publicly supported Grand Central’s preservation.

Kennedy Onassis also participated in rallies and brought supporters to Washington, D.C., to draw attention to Grand Central’s Supreme Court case. The court eventually ruled in favor of the preservationists.

The renovated vestibule is now adorned with a bronze plaque with the story of her work.

“The rededication of the terminal’s main entry vestibule to her is a fitting tribute to the woman who led those efforts, saving Grand Central during one of its most difficult hours,” Thomas Prendergast, chairman of the Metropolitan Transportation Authority, said in a statement.

When Kennedy Onassis passed away in 1994, a memorial in honor of her life and work was held at the terminal.