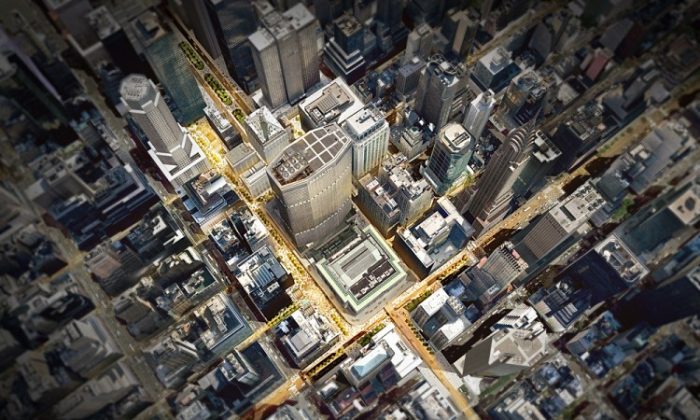 The SOM design shows a large suspended "halo" that would allow visitors to ascend and descend above the terminal with a view out over Manhattan. (Courtesy of the Municipal Art Society)
US

With East Midtown under focus for a potential revamp, what will become of Grand Central Terminal, the heart of the area and a major gateway to the city?

If the current zoning changes go ahead, towers around Grand Central could be as high as 1,200 feet, exceeding the height of the spire of 1 Bryant Square. If the towers take on the futuristic forms envisioned in a recent city planning review of the area, how will Grand Central sit within the presence of its new neighbors?

Grand Central Terminal was originally designed by New York architects Warren and Wetmore in the Beaux Arts style. The building took 10 years to construct, and finally opened to the public on Feb. 2, 1913, attracting 150,000 visitors the first day.

Grand Central currently sees 750,000 people pass through its doors each day. An expected increase of an additional 16,000 residences in the area projected by 2030, as well as increased density in other areas of the city may see this number rise even further. The station may need to undergo a transformation to handle the increased foot traffic.

In the lead up to the building’s centennial in 2013, the Municipal Arts Society selected three prominent architectural firms, WXY Architecture and Urban Design, Skidmore, Owings & Merrill, and Foster and Partners, to put forward design ideas for Grand Central and its surrounding urban areas.

All three presenters showed the recognition that while the terminal is a great public space, there is a need to have an external urban space to balance the interior and exterior and give the building the prominence it deserves.

Claire Weisz of WXY said Grand Central, in addition to Bryant Park and Times Square are three midtown living rooms, and suggested making vast urban improvements inspired by nature. Some bold suggestions would clear out the first six floors of the adjacent MetLife building, leaving structural columns and an urban forest. The west side of the elevated Park Ave would become a pedestrian walkway similar to the city park known as the High Line. A final move would see a large tower holding “Sky Parks” that continue the greening high into the sky.

Perhaps the boldest of the submissions was put forth by Roger Duffy, Design Partner in the New York office of SOM.

In addition to increased circulation and public space surrounding the terminal, SOM proposes an enormous cavity deep under the terminal that would allow for connection to a future concourse for additional train lines. Large glass elevators and light wells would allow natural light to filter into the space, similar to way the original terminal once did before new buildings blocked the light.

The most visually capturing feature of the proposal is a “halo” that would sit above the terminal connected to towers on either side. The halo would allow a kind of Ferris-wheel experience as the public could pop on and walk around the rim as it ascended and descended along slide bars adjoining the towers. Critics of the proposal have suggested the halo would drastically alter the presence and character of the terminal, attracting too much attention and in a kind of rock star way, and detract from the classical masterpiece that lies below.

Accomplished star architect, Lord Norman Foster pinpointed a number of opportunities in the existing built environment that would allow for increased pedestrian movement to allow greater access into the main terminal by removing some of the shops on the ground floor and replacing them with entrances. Two main ceremonial staircases amid a park on Vanderbilt Avenue would see natural light and a “moment of theater” as the public descended into the lower concourse and a succession of additional underground public spaces.

Foster’s proposal is appropriately subtle on street level in its approach, respecting the classical masterpiece.

While the designs arouse healthy attention to the building before its 100th birthday, it is unlikely that any will eventuate. Architect Frank J. Prial, of Beyer Blinder Belle, who has worked on the building since 1995 and through the restoration completed in 1998, said at recent tour of the station: “While it’s wonderful to do those, just to stretch the imagination, do something that you know your not allowed to do [referring to the SOM design], it’s highly unlikely.”