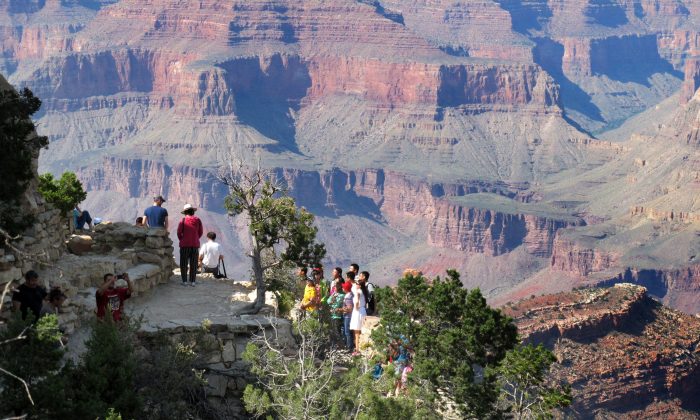 Visitors gather at an outlook on the South Rim of Grand Canyon National Park in northern Arizona, on Aug. 19, 2015. (Felicia Fonseca/AP Photo)
US News

For about two decades, tourists who visited Arizona’s Grand Canyon Museum Collection have been exposed to radiation, said a safety manager at the National Park.

Three paint buckets filled with uranium were the source of the radiation. They sat in the museum for decades, and tourists were unaware they were being exposed, reported the Arizona Republic.

The buckets were removed in 2018, but they weren’t brought to the public’s attention until January 2019, the report said.

The park’s safety, health, and wellness manager, Elston Stephenson, told his co-workers that nothing was done to warn employees or the general public about their existence.

“If you were in the Museum Collections Building (2C) between the year 2000 and June 18, 2018, you were ‘exposed’ to uranium by (the Occupational Safety and Health Administration)’s definition,” Stephenson’s email read, as reported by the Republic.

“The radiation readings, at first blush, exceeds (sic) the Nuclear Regulatory Commission’s safe limits. … Identifying who was exposed, and your exposure level, gets tricky and is our next important task,” he said.

He said the buckets were located in an area where tours commenced, averaging about a half-hour.

In a Feb. 11 email, Stephenson said he asked high-level National Park officials to tell the public, but he was rebuffed.

“Respectfully, it was not only immoral not to let Our People know,” he added. “But I could not longer risk my (health and safety) certification by letting this go any longer.”

He said the buckets of uranium were in the basement at park headquarters decades, but they were moved to the museum site in 2000.

The containers, he said, were located near the museum’s taxidermy exhibit. Tour groups, including children, stopped there for presentations, sitting next to the uranium for 30 minutes.

The close exposure to the radiation buckets could have exposed adults to 400 times the limit, and children were exposed to 4,000 times.

The Republic, citing public affairs specialist at the Grand Canyon Emily Davis, reported that the Park Service launched an investigation into the decades-long issue. The Occupational Safety and Health Administration (OSHA) and the Arizona Department of Health Services have joined in on the probe.

Davis said the building is still open, the Republic reported.

“The information I have is that the rocks were removed, and there’s no danger,” Davis added.

She didn’t address Stephenson’s assertion that potentially thousands of people have been exposed to high levels of radiation.

“We do take our public and employee safety and allegations seriously,” she said.

The museum building attracted around 1,000 visitors every year, News.com.au reported.